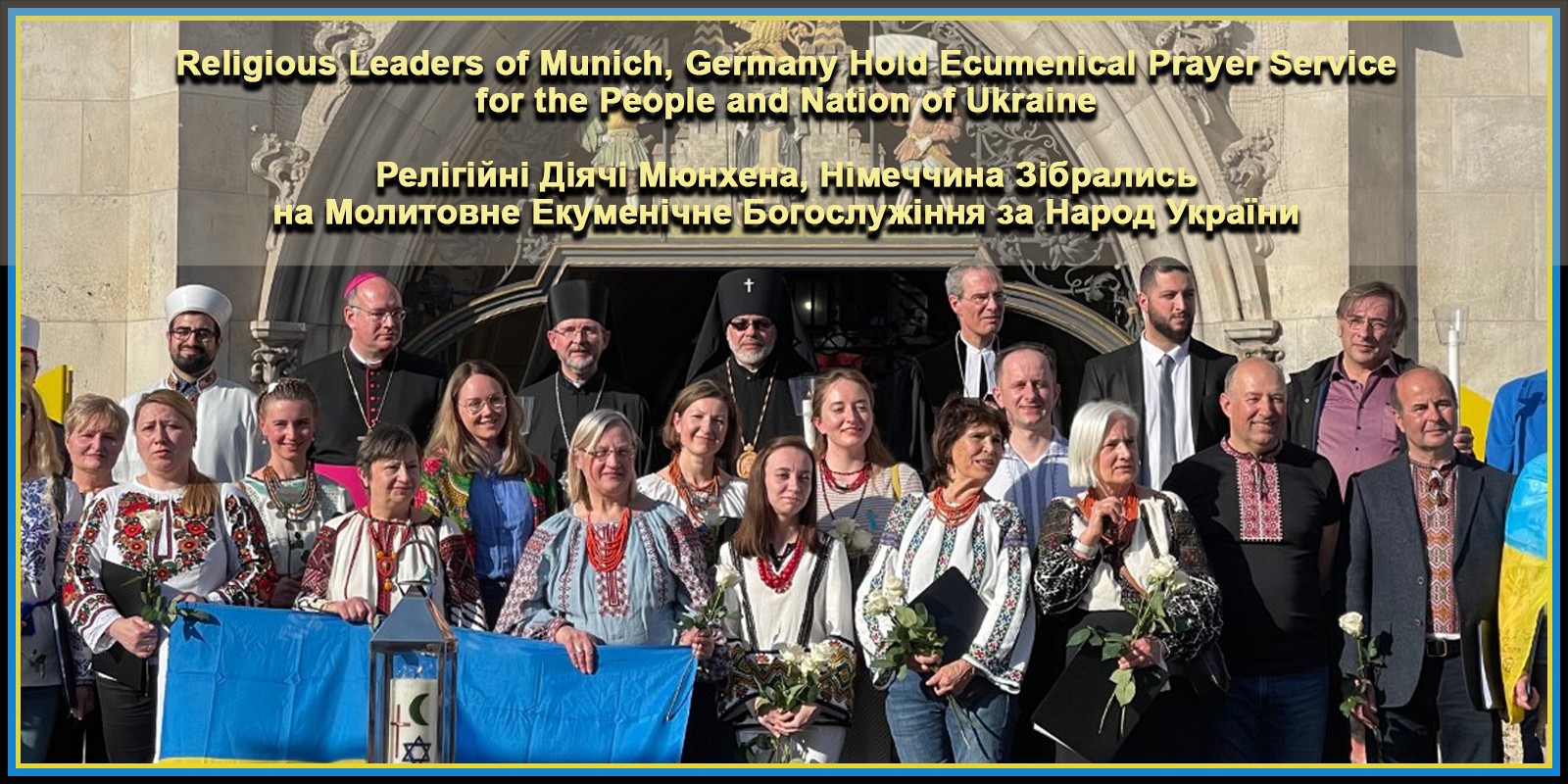 About 2500 people gathered on Sunday afternoon (March 27, 2022) at Marienplatz (Mary’s Square/Plaza) – a central square (since 1158) of Munich, Germany right in front Marian column (Mariensäule) – which is topped by a golden statue of the Birth-Giver of God, standing on a crescent moon as the Queen of Heaven – the Protector of Bavaria.

These 2500 people were of various national backgrounds, but united by the same goal – concern over the ongoing war in Ukraine. The Council of Religious Leaders of Munich, Germany dedicated the one-hour formal program in the main city square to the ongoing threat to humanity, as it arises from the attempted invasion by the Russian Federation of Ukraine. 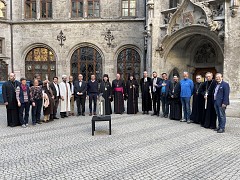 Upon the invitation of the Council of Religious Leaders, His Eminence Archbishop Daniel attended the prayerful rally and together with about 20 representatives of various religious entities offered remarks and a Prayer for Ukraine.

Joined by His Grace Bishop Bohdan Dzyurakh of the Ukrainian Greek Catholic Eparchy in Munich, Germany, Archbishop Daniel received a Candle of Peace from the representatives of the local Roman-Catholic Archdiocese and Protestant Church of Munich.

In his 3 minutes remarks, Archbishop Daniel stated in Ukrainian and English languages (as Deacon Alexander Smoktunowicz translated into German):

“…I was born in Ukraine… During my last trip to Mariupol, I walked the streets of that city with the local hierarch, watching young families caring for their children and building their happiness in the peaceful city on the shore of the Azov sea… the past 30 days have projected to the world a different image of that city… the same parents are fighting for the preservation of the life as their children crying in the basements, hiding from the artillery attacks of Russian military… the loss of human life is incomprehensible!..

Any loss of human life – any war is a crime against humanity… However, a war that purposely kills women and children is no longer just a war – it is a genocide and crime against God and his creation. There is no moral justification for this war and the atrocities that are committed by the Russian military in Ukraine. There is NO war that resolves the problems, on the contrary – the war feeds the violence, hatred – it displaces people, makes them refugees, creates hunger and destroys life, which as Christians we must always respect, honor and protect...

Let’s commit ourselves, no matter who we are and where we come from, to the preservation of LIFE; let’s declare to those in political power – STOP THE WAR! RESPECT LIFE! UKRAINE IS AND ALWAYS WILL BE A LAND OF THE FREE!”

Following the formal program of the Rally, Archbishop Daniel spoke to the members of the Greater Ukrainian community in Munich, meeting people from his native city of Buchach, Ukraine with whom all in attendance chanted Ukrainian National Anthem.

Religious Leaders of Munich, Germany Hold Ecumenical Prayer Service for the People and Nation of Ukraine