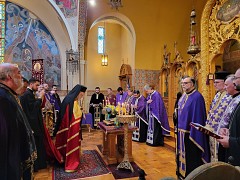 Metropolitan Methodios was met at the doors of St. Andrew’s by Jane Yavarow, parish president.  She welcomed him with the traditional Ukrainian greeting of bread and salt and thanked him for coming to worship together and for standing in solidarity together during these horrific days for our brothers and sisters in our ancestral homeland.  She asked him to lead us in prayer, as we all stand united for peace.

Fr. Roman then presented His Eminence with the cross and extended a warm welcome for him to lead us in worship at St. Andrew’s.

The church was filled with worshippers from various Orthodox Churches in the Boston area, all wishing to support the faithful of Ukraine and to offer intercessory prayers for her people.  It was beautiful to hear the church ring out with traditional Ukrainian litanies countered by the droning of the ison under the Greek Byzantine chant.

As the priests processed around the church with their icons, St. Andrew’s choir beautifully sang the Tropar for the Sunday of Orthodoxy:

We venerate Your most pure image, O Good One, / and ask forgiveness of our transgressions, O Christ God. / Of Your own will You were pleased to ascend the Cross in the flesh / to deliver Your creatures from bondage to the enemy. / Therefore with thanksgiving we cry aloud to You: / You have filled all with joy, O our Savior, / by coming to save the world. 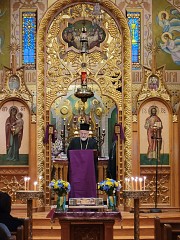 At the conclusion of the service, His Eminence Methodios offered some remarks.  Below are excerpts from that address:

“We gather this evening to celebrate the Sunday of Orthodoxy.  To celebrate the triumph of true and proven doctrine over error and heresy that threatened the foundations of the Church countless times.

We celebrate the victory of Orthodox thought purified and tempered in the crucible of history.

We celebrate the restoration of the Holy Icons as a wholly unique feature of Orthodox piety and faith.  We do not, however, gather in   order to engage in an emotional salute to history.   Our Orthodox Faith is not a relic of ages past, but a challenge to us to witness its truth in our own times.

What we celebrate is not a display of archaeological tokens, but a living and life-giving force in the lives of believing men and women.

The victory of the Church in the 9th century lies in the belief in the eternal power of Orthodoxy to restore the Icon of God which is imprinted in every human being.  It lies in the reality that the icon of God lived, and lives in the hearts of the faithful.  It lies in the fact that Orthodox spirituality survived and continues to survive all the influences and movements that have been set against it throughout Christian history.  If there is any meaning in commemoration, it is the value of remembering that faith always lives in hostile surroundings.  It is always behind enemy lines, continually engaged in struggle.

Orthodoxy is not an empty, triumphant slogan, nor a procession of beautiful icons, nor simply a Church of colorful observances and rituals as it is unfortunately considered by many.

Orthodoxy is the Church of Christ. Betrayed. Condemned. Crucified, but always Resurrected throughout the centuries.

Is Orthodoxy not betrayed, condemned and crucified in our times?  I am afraid we have little reason to be triumphant about Orthodoxy these days as we witness Orthodox killing fellow Orthodox… As we have Patriarchs who are not in communion with one another…

Three weeks ago, Russia launched an unjust and violent invasion into Ukraine.  We gather tonight to pray for all those lives afflicted by this brutal assault.  The implications of this humanitarian tragedy are being felt throughout Ukraine, indeed throughout the world.

We are witnessing an immense tragedy of human suffering. We especially mourn the deaths of innocent children.

As we watch the news on television, we are inspired by the incredible courage of the Ukrainian people who are facing terrible adversity with valor.  We are inspired by the bravery of the thousands of Russian brethren who are risking their freedom--- and perhaps even their lives--- as they protest this unprovoked, barbaric attack.

We pray that the Lord will hear our prayers and will not abandon his beloved children of Ukraine.”

At the conclusion of his Eminence’s words, Fr. Borislav Kroner, visiting from St. Michael’s Ukrainian Orthodox Church in Woonsocket, RI.  He shared some thoughts regarding the strength, compassion and love the faithful in Ukraine have and how they, created in the image of God, will be victorious, just as the faithful iconophiles were over the iconoclasts.

Finally, Fr. Roman thanked His Eminence, the visiting clergy, a visiting rabi, and the faithful for attending.  All were uplifted, having come together to pray as one for peace in Ukraine.

Photos: Courtesy of the Greek Orthodox Metropolis of Boston: https://boston.goarch.org/news/metropolis_news/2022/3539.html

Latest News
00000
287th day of the War… UOC of the USA Continues to Deliver Humanitarian Aid to Ukraine
00001
7,320 ft over the sea level - the Archpastoral Visit to the Top of the Mountain - Archbishop Daniel Visits St. Job of Pochaiv Parish in Los Alamos, NM
00002
In the Darkness of the Night – the LIGHT of LIFE is Shining Through the Ministry of the UOC of the USA
00003
Christmas Ornaments for the Consistory - Надсилайте прикраси на головну Різдв'яну ялинку в Консисторії Церкви
00004
17 December, 2022 - Join us for the Christmas at the Seminary
00005
Pre-order Your 2023 Calendar
00006
UOL Bulletin for December
Pastoral Reflections
00000
Entrance of the Most-Holy Birthgiver-of-God into the Temple
00001
Введення Пресвятої Діви Марії у храм
00002
Самарянин
00003
The Good Samaritan
00004
The Synaxis of the Archangel Michael and All the Bodiless Powers of Heaven
00005
Хвальба
Upcoming
00000
Archbishop Daniel's Liturgical Schedule
00001
UOC of the USA: Our Humanitarian Mission in Ukraine
00002
Month of DECEMBER in the Life of the Church - Місяць ГРУДЕНЬ в житті Церкви
Recent Galleries 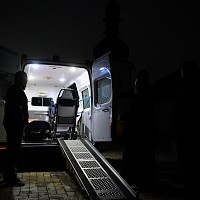 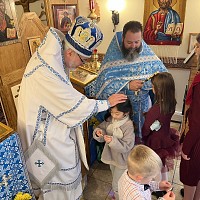