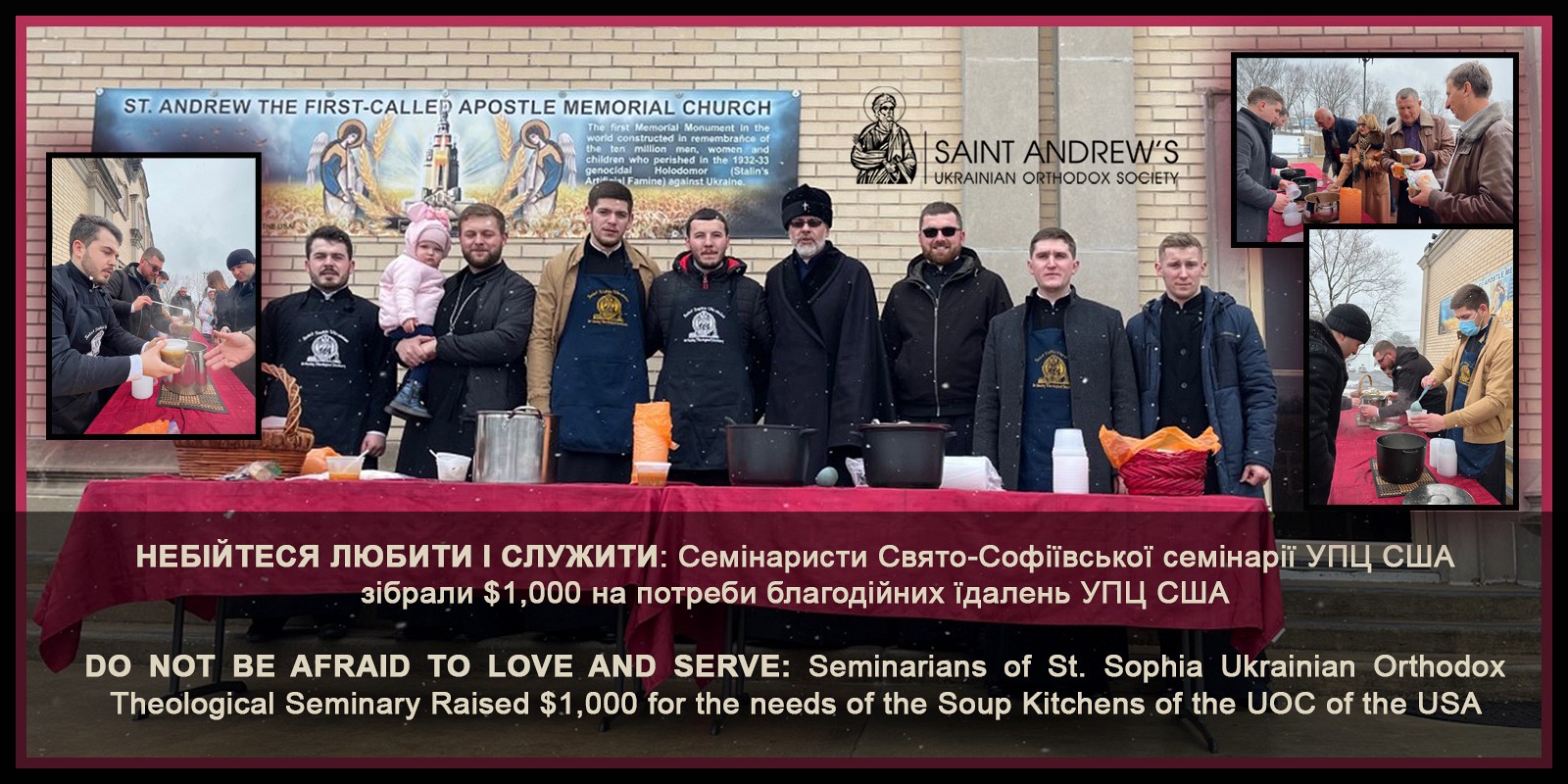 “Not looking to your own interests but each of you to the interests of the others.” Philippians 2:4

February 13, 2022 marked four weeks before the start of Great Lent - a time for retrospection, devotion, and sacrifice. The Orthodox Church starts to prepare her faithful to undergo the Lenten journey five weeks before it begins, by turning their minds and hearts slowly from the secular to the spiritual.  Last week’s Gospel Reading about Zaccheus who climbed the tree to see Christ, taught us to make an effort in our lives towards our own salvation.  This week, we heard about the Publican and the Pharisee.  One, outwardly a sinner, while the other seemingly a saint.  However, the Publican was humble and repentant of his ways, while the Pharisee was proud and haughty, considering himself better than those around him.  The Lord was more pleased with the tax collector’s prayer because the man had stepped back and realized his shortcomings, and humbly, with lowered eyes, came and asked forgiveness and the Lord’s mercy.  The Pharisee left as he came, not only ignorant of his own shortcomings, but, lacking in compassion towards others.

Therefore, the time has come to rededicate our efforts at serving others, rather than ourselves. To serve God, in every aspect of our lives, and with every fiber of our beings.

Today God blessed us with the several greatest opportunities to do just that, the first being His marvelous gift of one more new day when we can praise Him, contemplate, moreover do the deeds of love, and strengthen our faith.

The second opportunity is that we may be present and take part in the most wonderful and Life-Giving event, the Holy Liturgy (Eucharist), when we commune with God, and as says Holy Apostle Paul, “It is no longer I who live, but Ghrist lives in me; and the life which I now live in the flesh I live by faith in the Son of God who loved me and gave Himself for me” (Galatians 2:20), the greatest mystery of our Orthodox Faith, “God became man so that man might become God” (Words of Athanasius the Great), it is how we become partakers of Divinity, it is how we become as “Gods” through the grace of God.

The third opportunity is that God blessed us through our Spiritual Fathers Metropolitan Antony and Archbishop Daniel of the Ukrainian Orthodox Church of the United States of America, to do the deeds of love, charity, and kindness.

At the conclusion of the Divine Liturgy this morning, the Saint Sophia Ukrainian Orthodox Theological Society’s Chapter of the Ukrainian Orthodox League enacted one of these deeds of love and charity on the very steps of the St. Andrew Memorial Church. 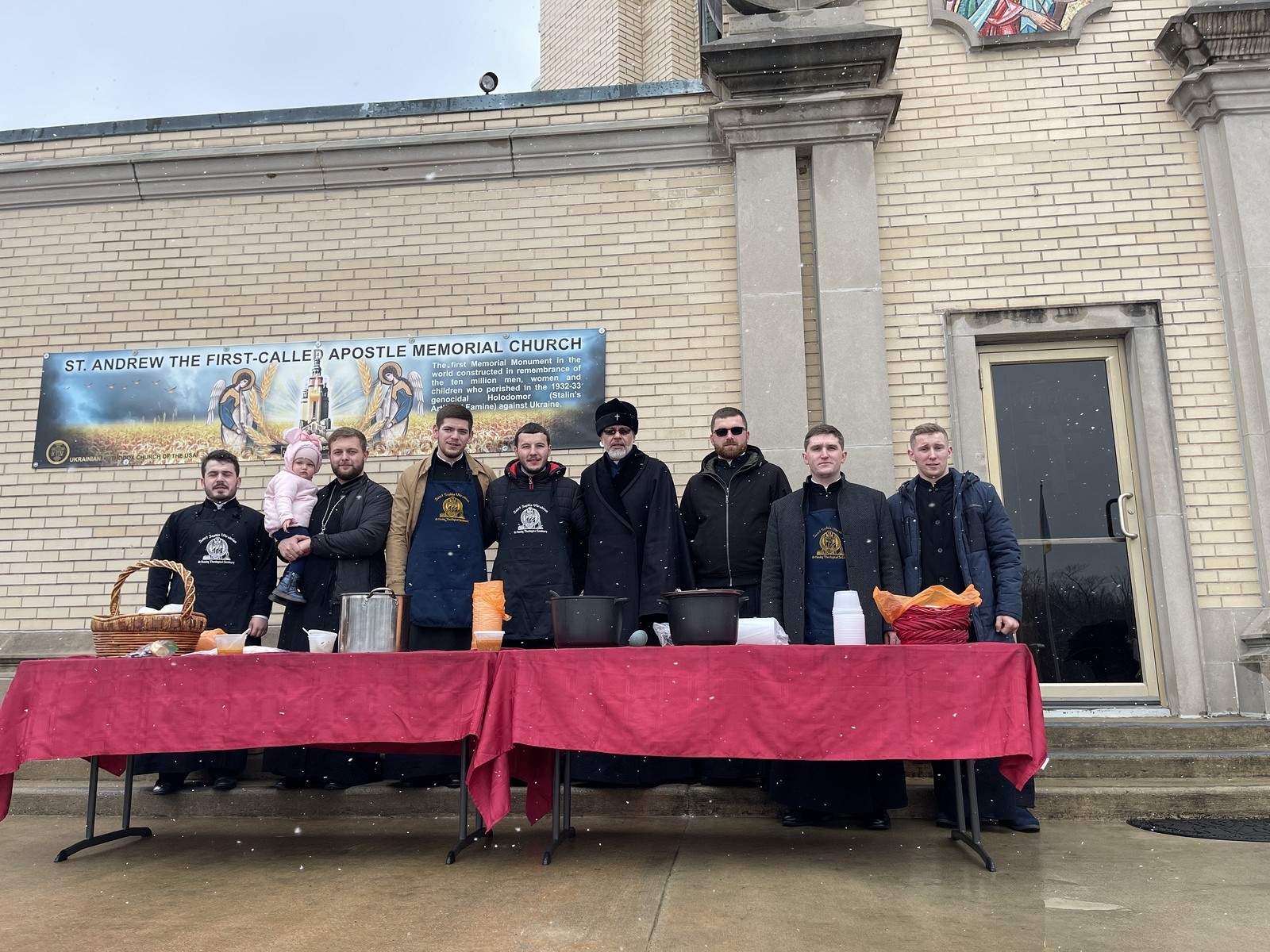 Having celebrated the Divine Liturgy, His Eminence Archbishop Daniel, Ruling Hierarch of the Western Eparch of the Ukrainian Orthodox Church of the USA, joined the seminarians on the steps of the church as they participated in the UOL initiative “SOUPer Bowl Sunday”, collecting funds towards the St. Andrew Society through the sale of bowls of soup.  Over the previous few days, the seminarians had been busy in the kitchen, chopping, grinding, grating, and boiling, pulling out old family recipes, and trying new ones.  The result was a wide variety of soups to be served borsch, vegetable soup, mushroom bisque, etc.

As the snowflakes slowly fell from the cold sky, the faithful, having nourished their souls, poured out into the chilly air, and got in line to purchase a hearty hot bowl of soup to nourish their bodies. The selection was great and the people smiled and laughed, as they inhaled the delicious aromas, trying to decide which soup to try.  Some purchased one container, others five or more, enough to enjoy and share with their friends and loved ones.  Everyone generously and joyfully donated funds, knowing that by doing so, the Saint Andrew Society would use these dollars to make a positive difference in many lives.  As an integral ministry of the Church, the Society’s philanthropic mission focuses on providing humanitarian assistance to the needy and supporting church-related projects in Ukraine. Since its founding, the Society has raised over 1.3 million dollars towards the support of religious, educational and humanitarian projects.

Most recently Archbishop Daniel delivered funds collected by the Society to the elderly and impoverished in the Mariupol region of Ukraine, providing them coal for heating, and other necessities of life such as food, medicines, etc.  In Kyiv, funds were used to provide hot meals to the cold and hungry, offering them a warm meal, a kind word, and a prayer.

As the snow strengthened, the faithful with packages bundled in their arms departed for their homes, happy for the delicious meal, and for having been able to donate to a worthy cause.  Archbishop Daniel and the seminarians remained on the steps and waved goodbye as the cars sped away, themselves feeling joyous, knowing that today they not only served God through serving the Divine Liturgy, but, they served God by serving others.

The funds (over $1,000) that were raised during the event, will benefit the Soup-kitchens which our UOC of the USA takes care of via the ministry of St. Andrew Ukrainian Orthodox Society.

May our Lord Jesus Christ bless us all; may He keeps us in safety and helps us to do truly good deeds which are pleasant in His sight.

Seminarians of St. Sophia Ukrainian Orthodox Theological Seminary Raised $1,000 for the needs of the Soup Kitchens of the UOC of the USA