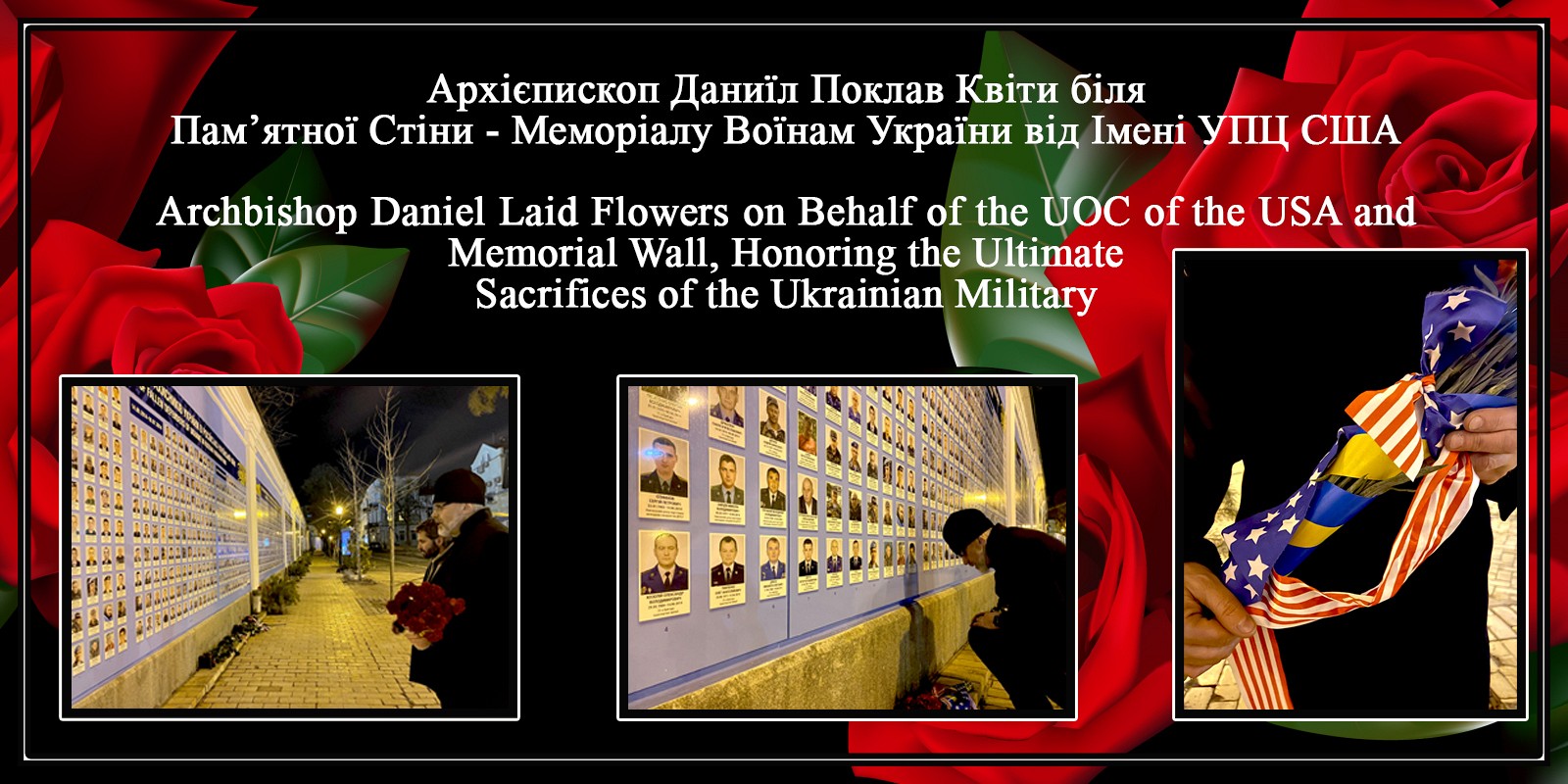 Having spent the previous week fulfilling numerous Church responsibilities, His Eminence Archbishop Daniel, Ruling Hierarch of the Ukrainian Orthodox Church of the USA, had one more act to fulfill before departing for the United States.

In the early hours of the morning, of February 9th, His Eminence, along with Fr. Vasyl Pasakas walked through the dark and empty streets of Kyiv. In his arms, Archbishop Daniel carried a bouquet of flowers, wrapped with the blue and yellow ribbons of Ukraine, as well as ribbons representing the stars and stripes of the flag of the United States.

As their final act in Kyiv, the two men approached the St. Michael’s Golden-Domed Monastery.  Even in the middle of the night, the golden domes shone brightly against the night sky, a constant symbol of God’s refuge found within their walls.  Walking quietly across the plaza before the monastery, they arrived at an imposing structure.  Before them loomed the Wall of Remembrance.  The wall was erected to honor the fallen heroes of Ukraine, those who lost their lives defending their homeland against the ongoing war of Russia against Ukraine and her people.

His Eminence solemnly gazed to his left, taking in the expanse and length of the wall, marking that each photo attached to the wall was a person, a father, mother, brother, son, daughter… who had paid the highest price imaginable in order to secure the lives of their loved ones, and the borders of their homeland.

The wall displayed over 4,000 soldiers, whose portraits seemed to gaze sadly back at the two men.  Below the photos the text listed their names, dates of death, and for 100 of them, stated that the person on the photo was yet to be identified.  The death of many of these men and women has resulted in 4,500 children being orphaned, alone, and scared.  758 of the lost soldiers were ages 19-25, with another 25 boys ages 16-18.

Archbishop Daniel and Fr. Vasyl bowed their heads and prayed for the peaceful repose of the souls who were depicted on this wall of sorrow.  They also prayed for an end to Russian aggression against Ukraine, a backing down of forces, as over 130,000 Russian troops have advanced to within 30 miles of the Ukrainian border and threaten a new war against Ukraine.

While the people of the world watch, the citizens of Ukraine live under threat, but they do not become enslaved to fear, as they choose life and liberty.  Just as our forefathers (many of whom are buried at St. Andrew Cemetery in South Bound Brook, NJ) stood up against Russian aggression, to eventually win Ukrainian Independence, so the people of Ukraine today stand up and are willing to give the ultimate sacrifice to safeguard their families, their homeland, their history, and their identity as an independent nation and people.

With the solemn realization that if, God-forbid, diplomacy fails over the following few days, the number of portraits on the wall will increase exponentially, His Eminence bowed his head sadly, and gently, on behalf of the faithful of the UOC of USA, placed the bouquet of flowers at the foot of the monument.  Raising his eyes to the heavens, Archbishop Daniel, and along with Fr. Vasyl Pasakas, chanted a soulful and mournful “Memory Eternal”.  The words…. «Вічная…..»  «Пам'ять…» echoed quietly along the empty streets and courtyards, surrounded each portrait, and rose to the heavens, where the Lord watched and listened.

May the Lord protect Ukraine, secure her borders, safeguard her people, and fondly remember all who gave their lives to protect their families and Ukraine, in His Kingdom.  Memory Eternal!

Archbishop Daniel Laid Flowers on Behalf of the UOC of the USA and Memorial Wall, Honoring the Ultimate Sacrifices of the Ukrainian Military

Latest News
00000
XXIII Regular SOBOR of the UOC of the USA - Registration Available NOW
00001
UOC of the USA Sponsors Food and Logistical Supplies for the People of Ukraine
00002
Happy 50th Birthday! - З днем народження!
00003
Holy Assumption (Dormition) of the Birth-Giver of God Ukrainian Orthodox Parish in Northampton, PA is 101 Years Old!
00004
Guardians of the Metropolia - Who Are They?
00005
Sacred Arts Contest: PRAY FOR UKRAINE
00006
We Continue to Nurture the TEMPLES of Human Life in Ukraine! UOC of the USA Continues to Provide Charitable Aid in Ukraine!
Pastoral Reflections
00000
Притча про Таланти
00001
Parable of the Talents
00002
Заповіді Любові
00003
The Universal Exaltation of the Precious and Life-Giving Cross!
00004
Багато покликаних, але мало вибраних
00005
The Guests at the Marriage Feast
00006
Herod’s Fear
Upcoming
00000
Archbishop Daniel's Liturgical Schedule
00001
Month of OCTOBER in the Life of the Church - Місяць ЖОВТЕНЬ в житті Церкви
00002
UOC of the USA: Our Humanitarian Mission in Ukraine
Recent Galleries