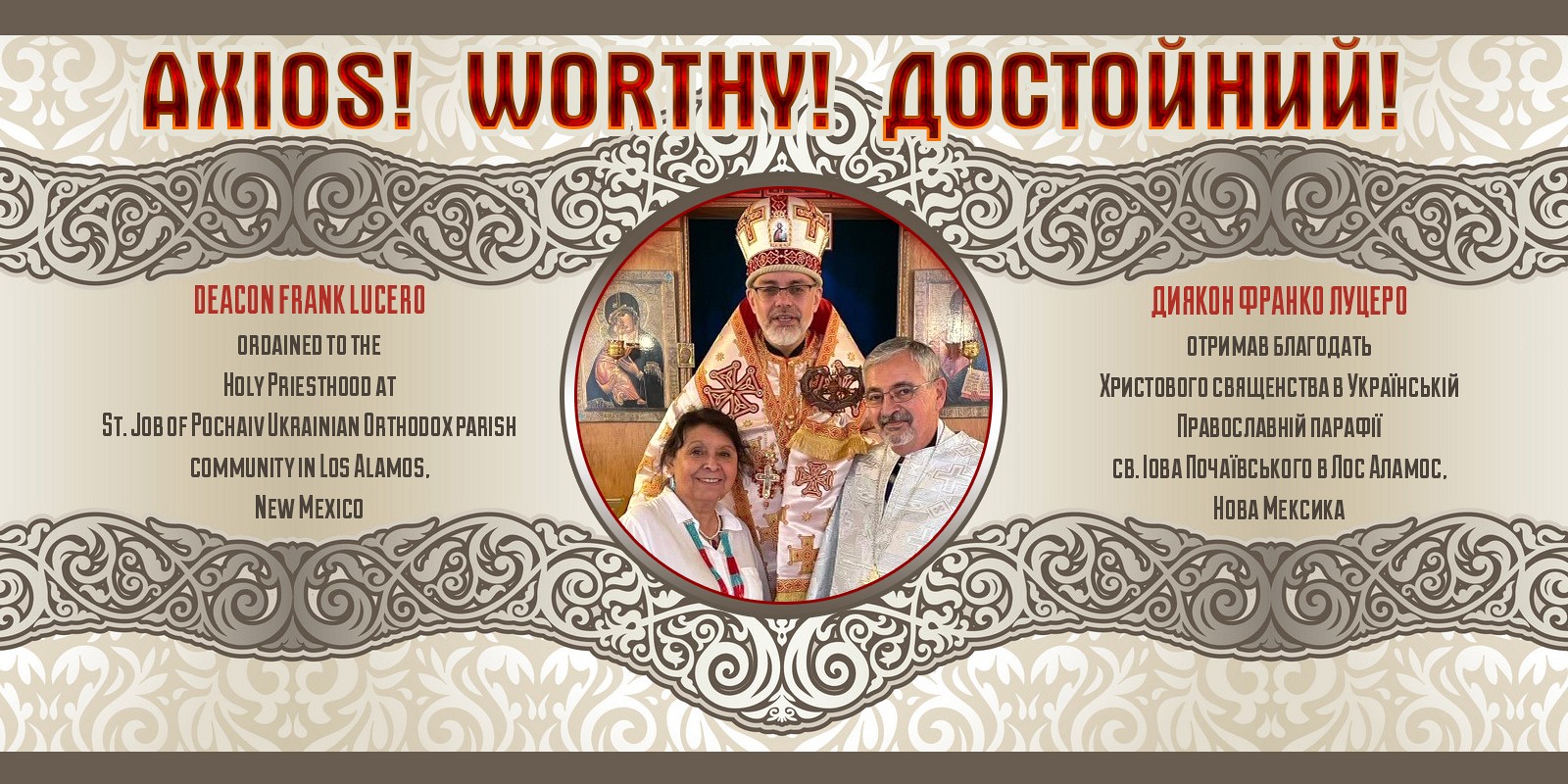 Ordaining a new priest for the Ukrainian Orthodox Church of the USA, His Eminence Archbishop Daniel encouraged him to witness to Christ’s truth.

Entering the parish temple, Vladyka Daniel was greeted by the members of the parish board of administration and the youth of the Church. Pani-matka Kristi Mackey presented His Eminence with the traditional bread and salt and shared with the hierarch that the bread was baked by the pastor of the congregation – Rev. Fr. Theophan Mackey.

Fr. Theophan also welcomed the hierarch into the temple, stating that this was a special occasion for the visit, following the most recent archpastoral visit of Vladyka Daniel to Los Alamos, NM in September.

Responding to the words of welcome, Archbishop Daniel addressed Deacon Frank Lucero “Today you begin living a truth that will empower you to serve the Church with all of your heart,” the Eparchial hierarch of the Western Eparchy of the Church said at October 1, 2021 ordination at St. Job of Pochaiv Ukrainian Orthodox parish in Los Alamos, New Mexico noting that on that day newly ordained Fr. Frank Lucero was beginning “a new life in and for the Lord.”

“Deacons and priests are men who must live the truth, seek the truth, preach the truth, love the truth and long for the day when we all will know the truth,” the archbishop said. “God’s Spirit assures the Church that we will possess the truth and that possession will make us all free. Christ Himself of course is the Truth as he called Himself.”

People in the congregation wore facemasks as a safeguard against the spread of the coronavirus, as did the clergy concelebrating with the archbishop.

As he gave his homily, Archbishop Daniel stood behind the beautifully decorated image of Cross of the Lord stating to the soon to be ordained priest Frank that he must live by the precepts of the truth that comes from the Holy Spirit and will empower him to live holy life in imitation of Christ and in service to the Church and face the challenges that come his way.

Vladyka Daniel encouraged him to be a man of prayer as he will serve the people entrusted to him.

“My son, the Church will soon come alive for you in the faces and through the voices of the people that you will encounter. The elderly and sick, the young and joyful, the grieving and confused, the couples and young adults who will fill your lives must also become the very images of the Church for which you must pray daily,” said the archbishop.

“Today, people will begin calling you as priest, father. You will become a father for people who are many years your senior, for people that you hardly even now know, for people who have very little reason to trust you or to accept your desire to care for them because you will represent Christ for them and that alone will be sufficient.”

Archbishop Daniel asked deacon Frank never to violate the trust that people place in him, because that can even cause others to lose their faith in God. And he encouraged him to let his joy be evident as he carries out his ministry, as a “sign that you know and love the God that you serve.”

In his homily, the archbishop also asked the soon to be ordained Fr. Frank to preach with conviction, to inspire people to believe in and live by God’s word. You should be “compassionate and forgiving confessors that Christ calls you to be,” as you forgive the sins of others and comfort them in the name of Christ in the Holy Mystery of Confession.

In his instruction, the archbishop told Fr. Frank that on day their relationship would change: “I become your father, your brother, and hopefully, even your friend,” he said. “Together by listening to, loving and appreciating one another, we will build up the Church in charity and in truth, as is the desire of Christ Himself.”

The Liturgy and the sacred moment of ordination included many powerful moments, especially as deacon Frank knelt silently before the altar and Archbishop Daniel laid hands on his head, ordaining the newest priest of the Church. 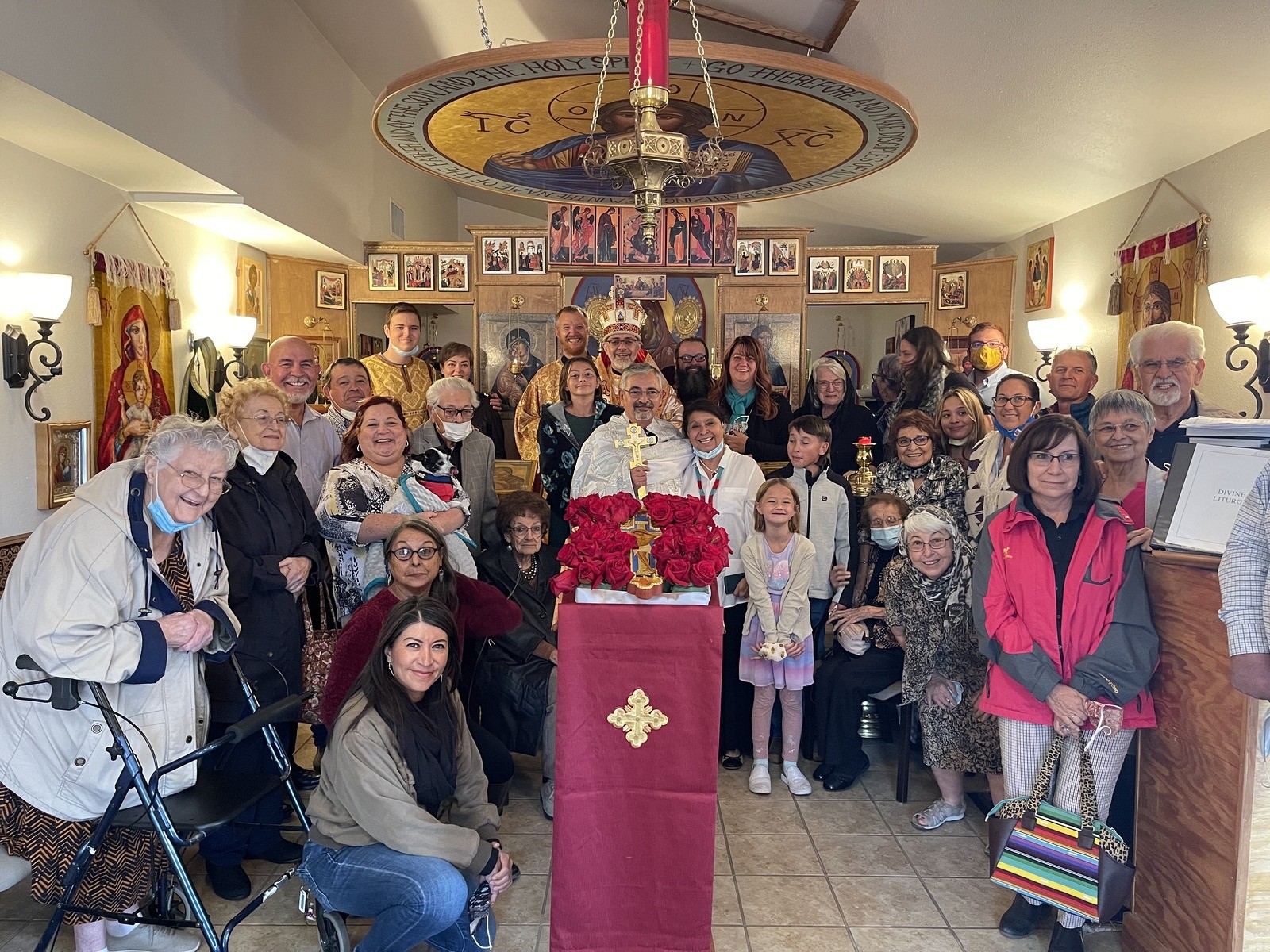 After the consecration of the Holy Gifts, Father Frank came and stood before the Altar as Archbishop Daniel handed him the consecrated Lamb saying:  “Receive this Divine Trust, and preserve it whole and unharmed until your last breath, because you will be held to an accounting therefore in the Second and Awesome Coming of our Great Lord, God, and Savior, Jesus Christ, at which time He will demand It from you.”

As the faithful lined up to partake of the Holy Eucharist, the Royal Gates opened and out came Father Frank holding the Chalice.  Under his hierarch’s watchful gaze, the newly ordained priest carefully bestowed the Holy Sacrament.  His Eminence gave the faithful one last blessing, returning the Chalice to the table of Oblation.

With a sigh of joy and relief Father Frank descended from the ambo to read the Prayer of Dismissal, thanking God for this day, for His Gifts, for His mercy, and asking for His guidance in the days to come.

Archbishop Daniel stepped out of the sanctuary and presented the certificate of ordination to him, reading off that by his ordination he is now blessed to perform baptisms, crowning ceremonies marrying a man with a woman, hear confessions, and all other Holy Sacraments.  Handing the certificate to the new priest, and giving him his blessing, he then turned his attention to Dobrodijka Rita and invited her to join her husband upon the solea.  The couple stood together as she bowed her head.  The Archbishop laid his hand upon her head and prayed that God grant her strength and wisdom to help her husband in his ministry.

Father Frank took the opportunity to thank Archbishop Daniel for the compassion, support and encouragement over the years.  He asked to keep him and his family in prayers, before turning to the others and thanking the clergy who had traveled great distances to participate in this celebration.  He thanked the Seminary Instructors, his brother seminarians, and guests for joining him on this day and asked for their continued support and prayers.  He turned to his wife, and thanked her for always being there for him, and finally thanked his family for supporting him as he had studied and encouraging him as he followed his calling.  As he invited everyone to enjoy a luncheon at the parish building, the congregation in attendance sang a joyous rendition of Mnohaya Lita!  Many Years!

Ordination of the Holy Priesthood in Los Alamos, New Mexico