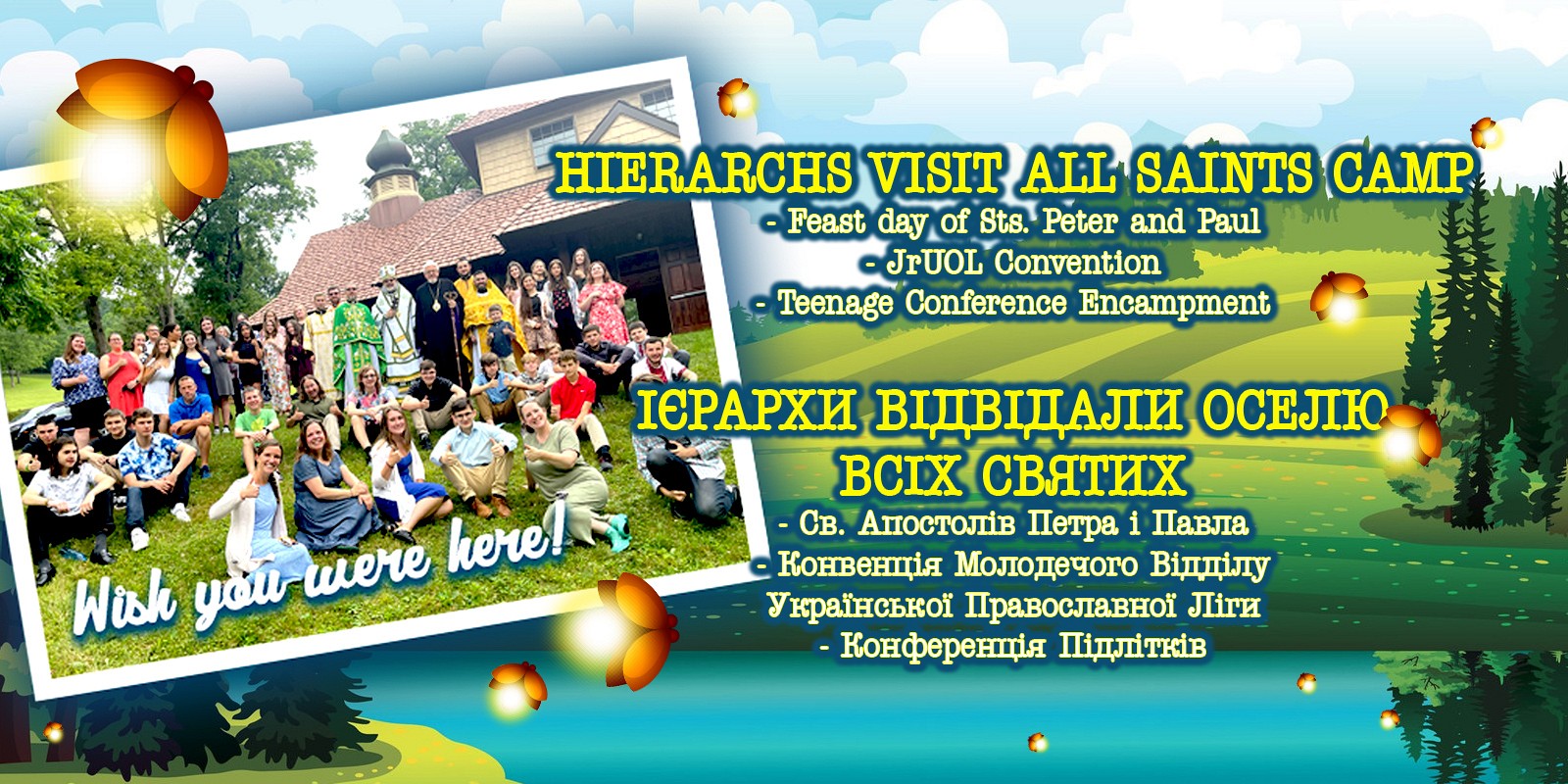 As the early morning mist lifted from the Allegheny River, wafting over the wooden dome of the St. Thomas Chapel at All Saints Camp in Emlenton, Pennsylvania, it seemed that all of nature stretched and yawned, preparing for a new start.

For the past two years the only residents of the camp were the deer, squirrels and other wildlife that roamed the lush green fields and frolicked in the calm warm waters of the river.  Even hidden from the world, nestled in a secluded valley, the impact of the global pandemic was felt at the campgrounds.  As the threat of infection gradually began to lift, the faithful of the Ukrainian Orthodox Church of the USA began to slowly return to the campgrounds.

On this day, as the Apostles Fast came to an end, and the Church celebrated Sts. Peter and Paul, the faithful not only celebrated the Apostles, but life and hope.  On this day, the campground echoed with the joyous laughter of children who are the future of the world, as they gathered for the opening day of the 60th Junior Ukrainian Orthodox League Convention. 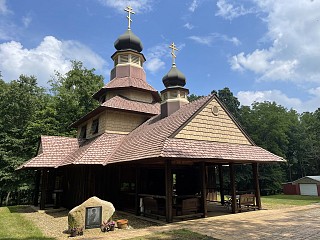 The festivities began with the celebration of a Hierarchical Divine Liturgy.  With broad grins and eyes shining with anticipation, the youth of the Church gathered in the cavernous wooden nave of the St. Thomas Chapel.  The golden rays of the sun danced in the incense laden air settling upon His Eminence Metropolitan Antony, Prime Hierarch of the Ukrainian Orthodox Church of the USA who was present, as His Eminence Archbishop Daniel, Ruling Hierarch of the Western Eparchy, served the Divine Liturgy.

Having read the Gospel from Matthew 16:13-19, Archbishop Daniel addressed the youth around him.  He explained that Christ chose His Apostles from a group of regular men.  We know that most of them were fishermen, whom He appointed to be fishers of men.  Christ knew each one before He called them to follow Him.  These were not learned men, they did not hold college degrees, and yet by the Grace of God, they were able to change the course of history by spreading the news of Christ’s Resurrection, and through perseverance build the Church of which we are all today members of.

As Disciples the 12 men heard countless sermons spoken by the Lord as He ministered to the people.  The Disciples were witness to countless miracles – water turned into wine, the healing of twisted limbs, eyes born blind opened to the world, leprous skin healed like new, demons expelled, and the spark of life returned to cold dead bodies.  Even having seen and heard all this, having spent three years, 36 months, alongside Christ, eating with Him, traveling with Him, resting near Him, they still wavered… until the Resurrected Lord sent them the Comforter.  Having been filled with the Grace of the Holy Spirit, all fear left them.  They were no longer students, learning, trying to figure things out… they were now the instructors.  Having been gifted the Gifts of the Holy Spirit, they were now equipped to face everything the world would throw at them.  They would have the fortitude to traverse the continents, educate the multitudes, and establish the Orthodox Church, leading millions to know and love the One True God, and thus to eternal salvation.

We are all called to follow in their footsteps.  The Holy Spirit did not only descend upon the Apostles, but, during our own Baptism and Chrismation, He ascended upon us, and we were anointed as members of Christ’s Holy Church and given the responsibility to join in the Great Commission of the Apostles – through love and mercy, to continue to strengthen and build the Church.

His Eminence stated that everyone is graced with gifts which God expects to be used in this process.  Each of us has something to contribute.  Some people are analytical and can help with keeping parish finances in order, collect funds to distribute to those in need, and analyze the needs of the church.  Others will have the gift of healing, working in the medical field to spread God’s love to those who suffer from illness.  While others will have the gift of leadership, holding positions of administration at their parishes.  Some will sing in the choirs, others will teach, some will cook, and some will clean… and everything when done for the Glory of God, through love, will strengthen the Faith, and spread the Word of God.

We are all called to be Apostles of the Faith.  Every day try to follow Christ, and have others follow you to Him.

The youth, with brows furrowed, contemplated this new realization through the remainder of the Liturgy, approaching the Holy Chalice and partaking the Eucharist with the gravity of His Eminence’s words deep in their hearts.

Having concluded the Divine Liturgy the youth gathered under the Pavilion for the commencement of the Teenage Conference Encampment which ran congruently this year with the JrUOL Convention.  The tables were spread out giving everyone plenty of room.

Having been in isolation for the previous many months, the children felt liberated and excited to continue with their lives.  They happily participated in the various sessions, voicing their opinions, formulating questions, and light-heartedly participating in all the discussions.

Everyone quieted down as the microphone was handed to Metropolitan Antony, who took advantage of the young audience to plant some seeds that will sprout into glorious, lush vines one day.  His Eminence stated that when we take a good look at the world today, we see violence and hatred.  Social Media seems to go out of its way to propagate and share videos and clips of hate speech, riots, violent acts, people demanding things, belittling others, and causing strife.  It is easy to get caught up in this evil spirit, to go along for the ride, to wrongly think that bad is good, and that humility and mercy are a sign of weakness.

Metropolitan Antony implored that the youth pick their mentors and heroes carefully and that they always keep their eyes focused on Christ.  He asked they be vigilant as they go about their daily lives, and always act with mercy and kindness emulating our one true Hero, Christ, and His Saints.  St. Peter had denied Christ, but the Lord did not return this act by denying Peter.  He forgave Peter and helped him to become the strong Saint we know and love today.

St. Paul actively persecuted Christians, and yet Christ did not destroy him for these evil acts, but instead helped him to “see the light”.  Having believed in Christ, St. Paul became one of the greatest saints of the Church.  Saint Peter and Saint Paul are the two pillars, the foundation, upon which Christ has built His Church.  They were true to their calling.

His Eminence asked that each person listening also be true to their calling.  He asked that we look upon others as Christ sees them and treat them with mercy and love.  He asked that they go out into the secular world that is trying to mock the Faith and trying to convince everyone that God does not exist and prove them wrong.  Through kindness, mercy, and love, they are to show the world that God does exist, and that salvation can only be found in and through Him.  They are to be the fishers of men in this post pandemic, counterculture, world.

The children had sat mesmerized by the words of their shepherd, taking it all in, realizing that his words rang true, and reaffirming their conviction to follow his instructions, to follow Christ, and to shower the world with mercy and love. 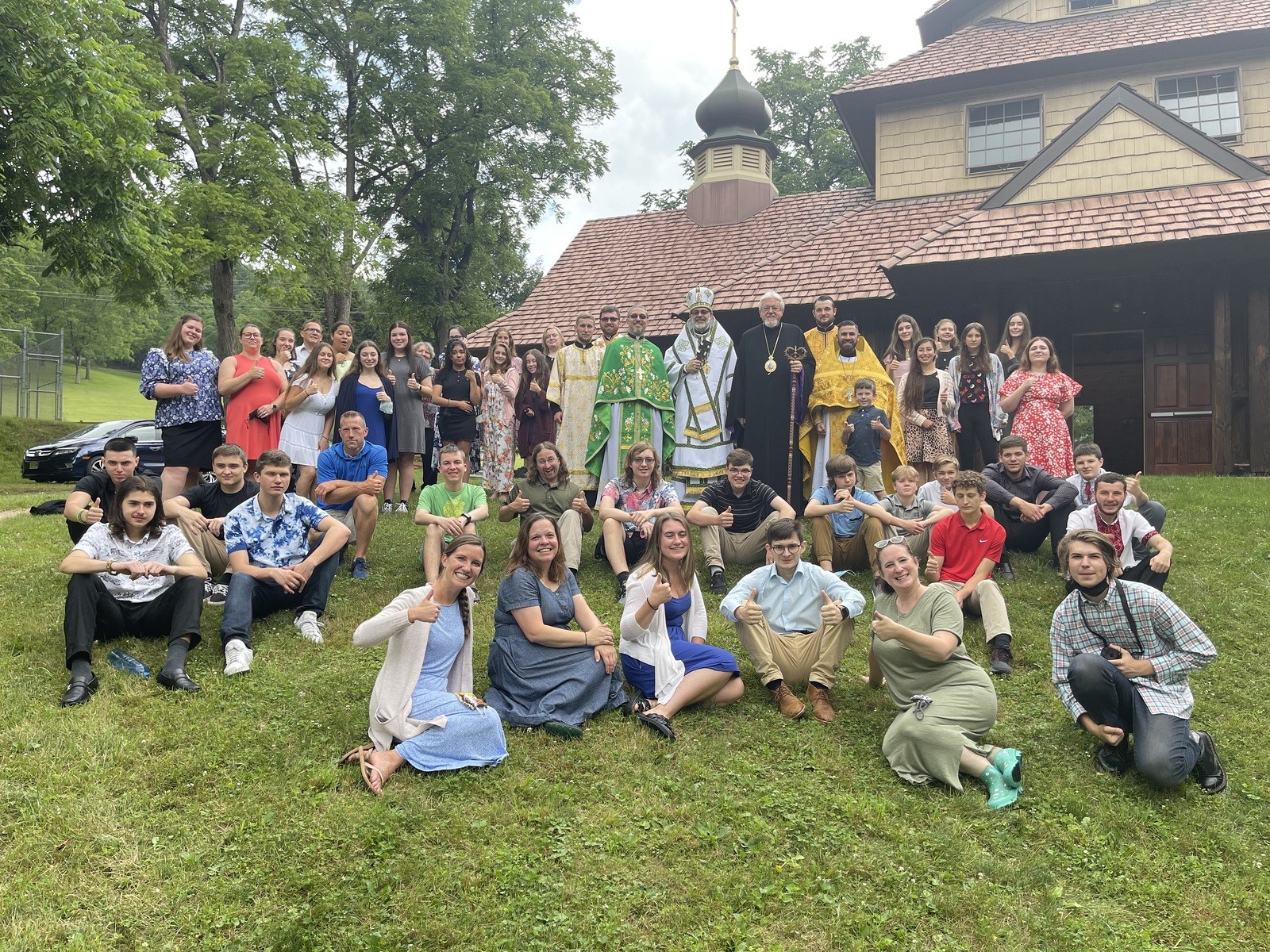 The day was full of activities.  There were still elections to be held for the JrUOL National Executive Board, lessons to be learned, crafts to be created, games to be played, and lifelong memories to be made.  Laughter echoed through the campground throughout the day, as the children learned, played, and prayed.

The cicadas sang in the trees, and the crickets chirped in the slowly swaying tall grass, as the lazy summer day rolled along, and the seeds planted by the hierarchs took root, and began to sprout.  As evening encroached, and the valley fell into darkness, the campground was covered in silence. The fireflies twinkled among the tall trees, and the stars began to sparkle in the heavens as the children stood silhouetted by the light emanating from inside the St. Thomas Chapel where they had gathered for Evening Prayers.  Their soft voices, chanting and singing, carried on a cool breeze out of the chapel doors and rose to the heavens where the Lord watched and listened.

Hierarchs of the Church Visited All Saints Camp