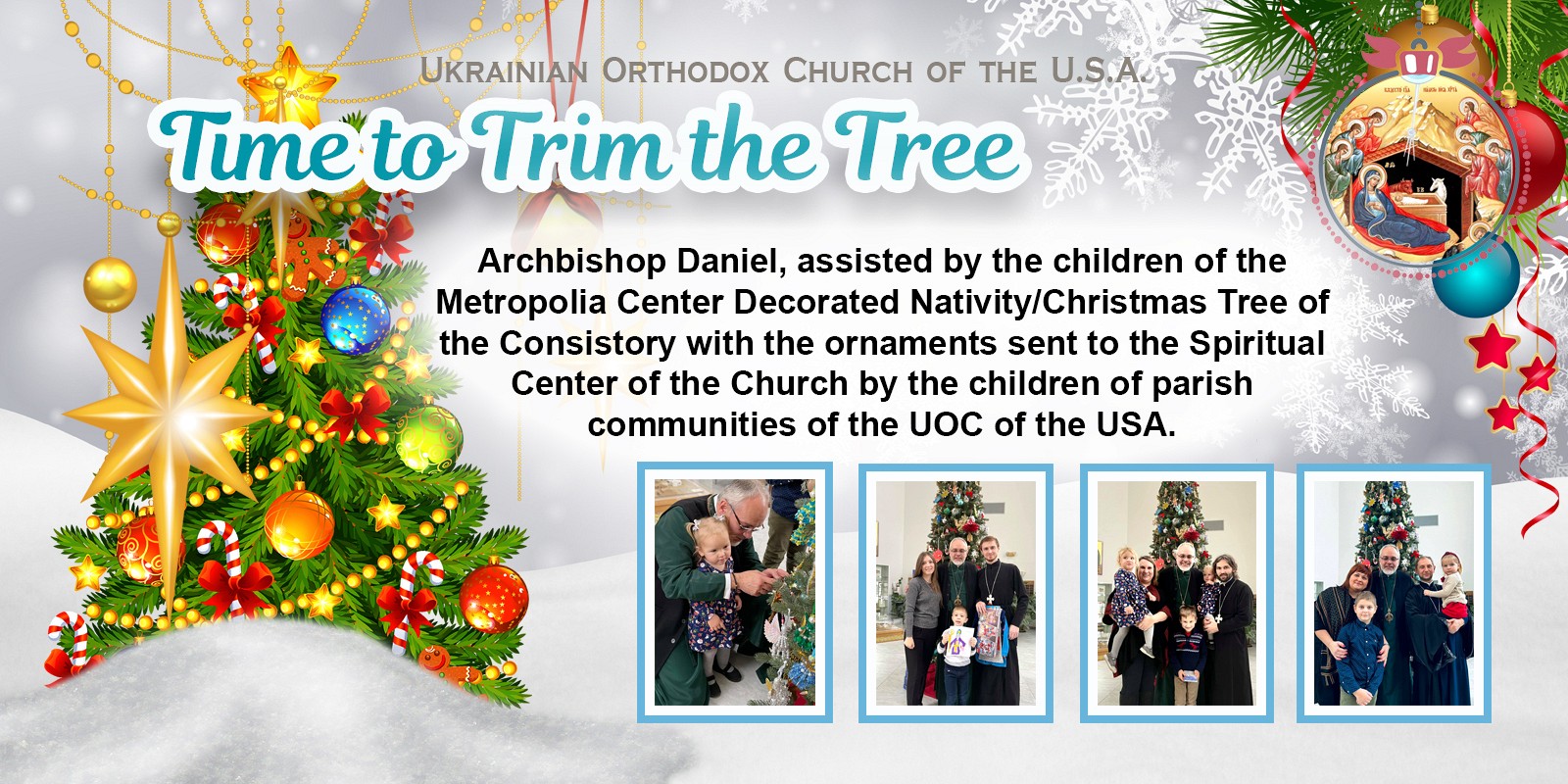 On Saint Nicholas Day, feeling uplifted after the Divine Liturgy, His Eminence Archbishop Daniel entered the atrium of the Consistory Office building and was met by a stately green Christmas tree standing in the center of the room.  While beautiful in its majesty, decked in colored lights, the tree was lacking color and sparkle.

The situation was soon remedied, as His Eminence reached over and began rifling through the box of ornaments that had been lovingly created and sent to him over the previous many weeks.  Next to the box of ornaments from previous years, this year’s creations submitted by Mrs. Irene Mizuk from Port Orange, Florida, as well as the Pavlykivskiy, and Pasakas families, twinkled and glimmered, as gems, jewels and glitter reflected the light from the tree.

As Archbishop Daniel pulled out one, and then another, ornament and stood admiring the handiwork, the hushed silence was soon broken by the giggles, squeals, and laughter of little children as they came tumbling through the door.

Invited to help decorate the tree were the families of the Metropolia Center:

In no time at all the tree looked resplendent, dazzling, dripping with colorful and bright ornaments.  As the baubles and decorations were hung, the atrium echoed with song, as everyone joyously sang Christmas Carols.  With smiles and laughter, everyone took a step back to admire the beauty before them.

His Eminence called to the children to get their attention, and asked them if they knew the song sung for Saint Nicholas “Ой хто, хто, Миколая Любить!” “Oh who, who, loves Nicholas!”.  All the kids began jumping up and down waving their hands and screaming “I do! I do!  I know it!”.

With a grin, Archbishop Daniel quieted them down, and asked them together to sing the song.  As the sweet high-pitched voices began to sing the verses, the littlest ones just stood with eyes shining… when suddenly the door opened, and to everyone’s surprise Saint Nicholas himself entered the building.

He proclaimed loudly “Glory to Jesus Christ!” and then turning quickly to the children, asked them if they had been nice this year.  Had they listened to their parents?  Did they clean their rooms?  What about vegetables, had they eaten their vegetables?  Most importantly, had they said their prayers each day?

As the children squirmed under his gaze, St. Nick burst out in loud laughter as he motioned for the kids to come forward for a big hug.

With the kids crowding around him, Svyatij Mykolaj reached deep into the bag he had brought with him, and slowly pulled out gifts for each child present.  Soon the tidy atrium was littered with wrapping paper and boxes, and Christmas Carols were replaced with laughter and the happy sound of children playing.

Before leaving them, Saint Nicholas gave them advice for the future year – to be good boys and girls, to pray daily, and to obey their parents, and then he asked them to join him at a table which was set up in the adjoining room, where they could enjoy a warm pizza with their parents.

As the sun set that evening, and the atrium darkened, the tree stood proudly, twinkling brightly, as if the heavens themselves had descended upon the building.  As the children’s voices waned in the distance, and echoes of the carols continued to swirl in the air, the decorated tree was ready and waiting to celebrate the upcoming Nativity of the Lord, and to hear the proclamation that “Christ is Born!”