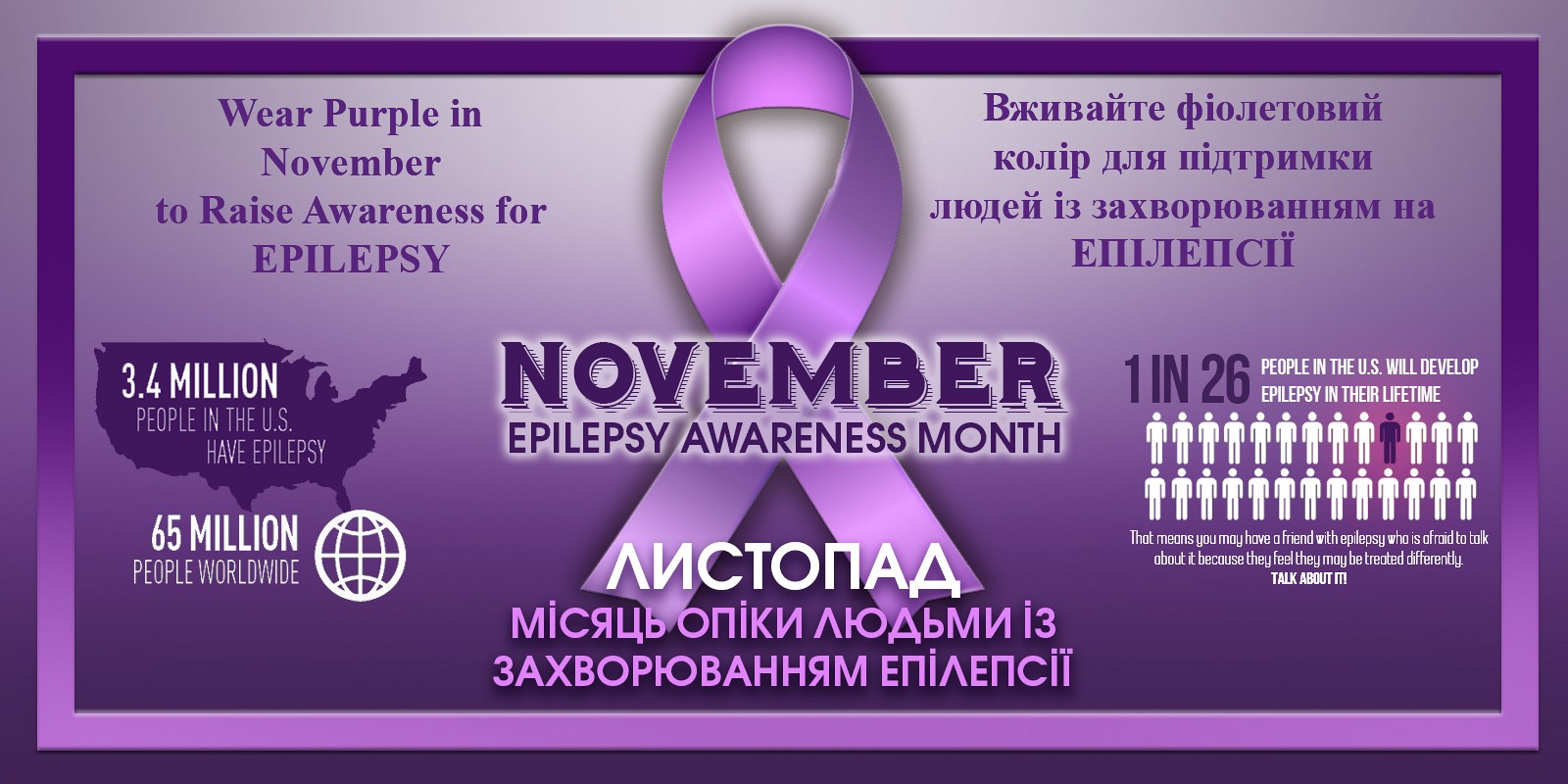 Council of Bishops of the UOC of the USA: November is Epilepsy Awareness Month

O, Lord Jesus Christ, You took pity on the blind Bartimaeus and healed him; You raised Lazarus from the dead; You made the blind see, the deaf hear, the dumb speak, the lame walk, You cleansed lepers and cast out demons. You preached the Good News to the poor and bless those who are faithful to You. Through the intercession of Your Holy Apostles grant Your healing and consolation to the sick, especially those that are infirm with illness of epilepsy. Give them the strength to carry their daily cross in union with You and Your Salvific cross. Help us to remain faithful to You in health and in suffering; open our hearts to Your will and transform our lives. For You are a Merciful and Loving God and to You we give glory, to the Father, and to the Son, and to the Holy Spirit, now and ever and unto the ages of ages. Amen.

Beloved brethren in Christ: November is EPILEPSY Awareness Month in our country!

One of the great needs we have as Orthodox Christians is to deepen our faith and stay current in its application to issues, we face as a culture. Providing ways to do that is the motive behind this informative pastoral letter to the faithful of our Holy Ukrainian Orthodox Church of the USA.

Epileptic seizures have been known from time immemorial. Throughout the ages, however, ideas concerning the life of an individual diagnosed with epilepsy and treatment of the illness changed considerably. Epilepsy is mentioned many times in the Old Testament, where it is portrayed as a mysterious condition, whose symptoms, course and contingencies evade rational laws and explanations. In the Middle Ages, the accepted view which prevailed in social consciousness was that patients with epilepsy were possessed by impure spirits. Our understanding of epilepsy and its social consequences has improved considerably within the last century. The most significant progress as far as diagnosis and treatment of epilepsy is concerned took place in the last four decades of the twentieth century. Although we now know much more about epilepsy than we used to, this knowledge is still insufficiently popularized.

So, November is the month of the year when we raise awareness about this illness. The aim of this national campaign is to get people talking about epilepsy and raise awareness of a condition that affects thousands of people across the world.

Here are the facts: Epilepsy is a poorly understood condition, despite the fact that it is the 4th most common neurological disease. Statistics show that 1 in 26 people will develop epilepsy in their lifetime. Although epilepsy is prevalent, public awareness is low, and many people are unaware of the symptoms and signs of epilepsy and how it impacts sufferers.

The reality is that epilepsy can affect anyone, and learning about epilepsy and Epilepsy Awareness Month equips people with the knowledge and insight to support campaigns and assist those who display symptoms of seizures.

Epilepsy can impact anyone, and there are currently over 3.4 million people living with epilepsy in the US alone. Globally, epilepsy is considered the most common severe brain disorder by the World Health Organization.

Initially launched to enable people to understand more about the condition and how it affects day to day life, more recently, the campaign has focused on preventing discrimination and eliminating myths and perceptions that permeate public thinking.

Over the years, more and more organizations have signed up to support Epilepsy Awareness Month, and this trend looks set to continue.

Epilepsy is a neurological condition, which is characterized by seizures, which cause involuntary movements, shaking, confusion and anxiety. Seizures vary, and coming across somebody who is having a seizure can be terrifying, especially for those with limited knowledge about epilepsy. This is why campaigns like Epilepsy Awareness Month are so important.

How to get involved: What you can do?

Our Orthodox spirituality is the spiritual practice of living out a personal act of faith including praying at church and also private prayer. The Sacred Scriptures teach us that we should pray everywhere including devotions such as Private Prayers, community Moleben services, icon venerations, etc.

There are myriad ways to lend support to Epilepsy Awareness Month. Events take place all over the world to raise awareness of epilepsy and generate funds for charities and organizations that support epilepsy sufferers.

From sponsored walks and bake sales to dress-down days at work, there are plenty of ways individuals, communities, businesses, schools and parishes can spread the awareness about the illness and the ways of living with it.

The color purple is also commonly associated with epilepsy. In our culture, we often use colors to spread awareness. So, wearing purple clothes and decorating rooms and public spaces with purple banners and balloons is also a great idea.

Another good idea is to get involved in courses and workshops (at the local hospitals and medical professional offices) that provide information about the condition and basic first aid training. Many people wouldn’t know what to do if they came across a person having a seizure in the street, and one of the most crucial aspects of the campaign is to encourage the public to learn how to react in this scenario.

Our parish communities can celebrate Epilepsy Awareness Month by lighting up landmarks in purple. Social media is also an excellent platform for sharing and liking posts about epilepsy and generating knowledge about the illness.

So, as we enter into the month of November, open your hearts by praying and offering yourself in the service of your parish family and local community by spreading and sharing awareness about Epilepsy.

With prayers in the Lord, your bishops and spiritual fathers, 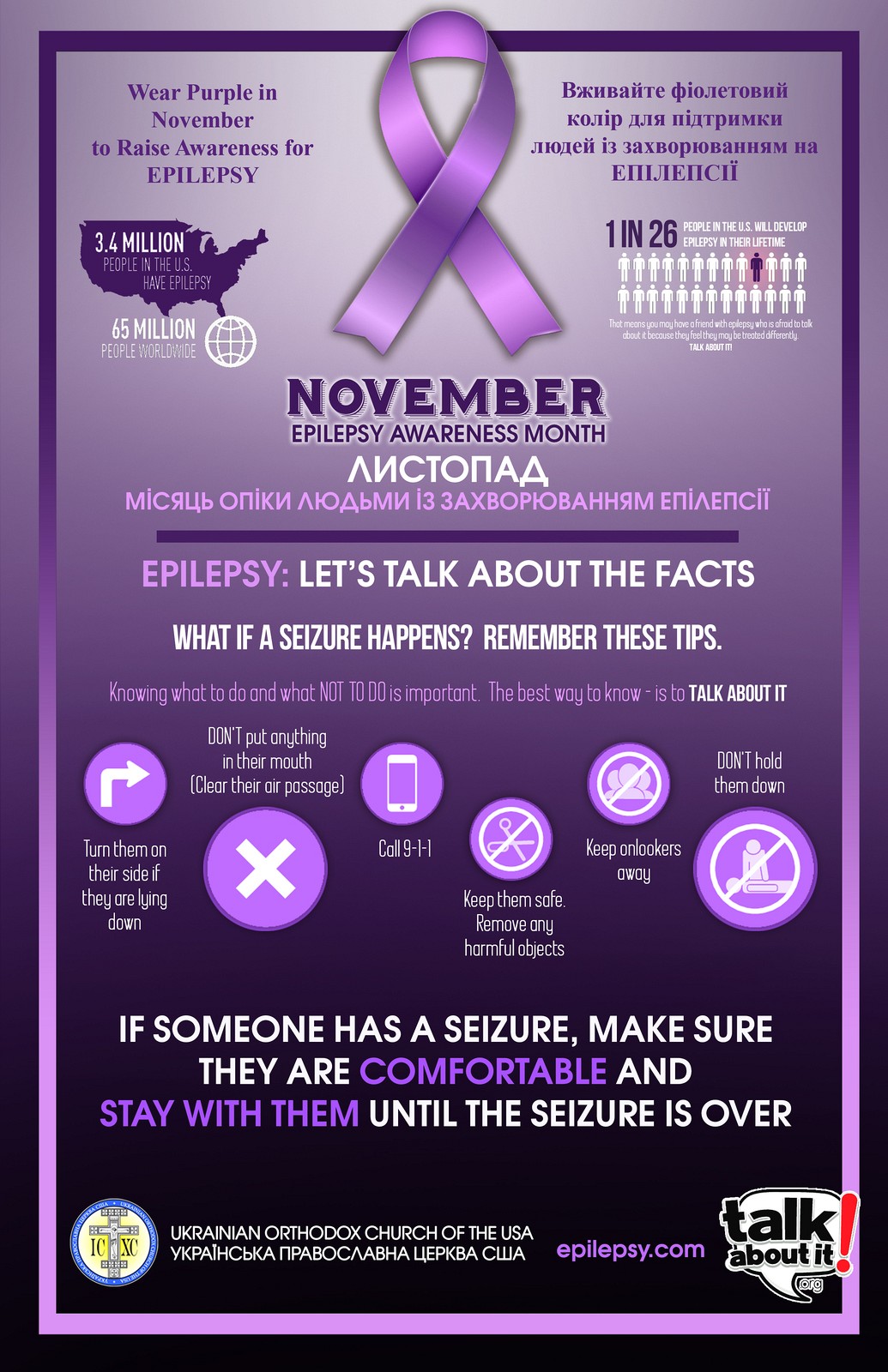