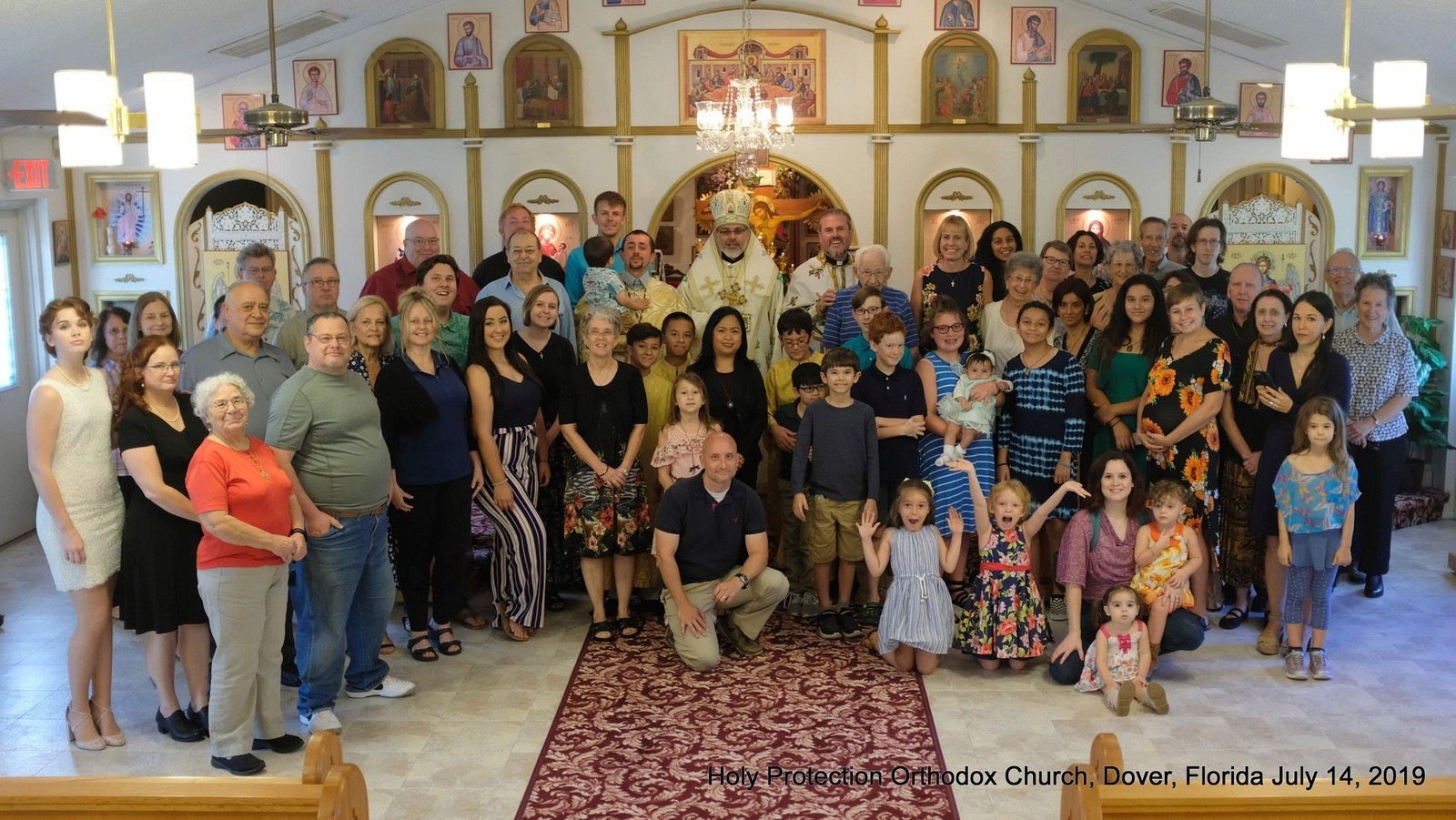 Dover, FL - a small town of about 3200 people (according to 2010 US National census) in the suburbs of Tampa, FL is a home for the Protection of the Birth-Giver of God Ukrainian Orthodox parish community, which is served by Very Rev. Fr. Harry Linsinbigler.

On the fourth Sunday after Pentecost, July 14, 2019 – His Eminence Archbishop Daniel made a hierarchal visit to the parish family while presiding over the Divine Liturgy, celebrating the feast of Holy Equal-to-the-Apostles Great Princess Olha (according to Gregorian Calendar). 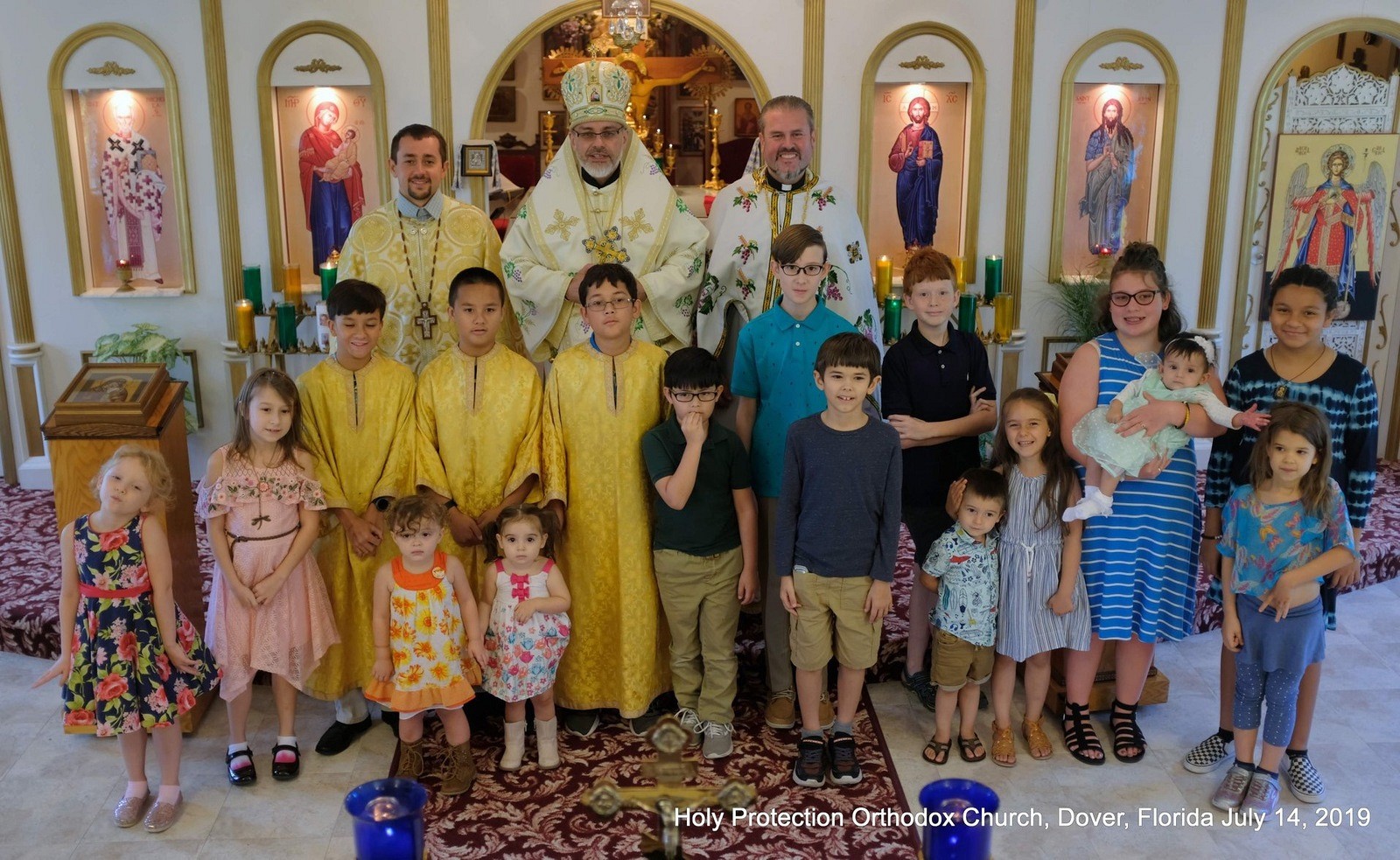 Vladyka Daniel finally arrived Tampa Metropolitan area following several re-scheduled trips, as he embarks on a long cross-Pacific journey to Sydney, Australia – where both the archbishop and His Eminence Metropolitan Antony are scheduled to preside over the Clergy-Laity Congress – SOBOR of Australia and New Zealand Eparchy of the Ukrainian Orthodox Church in Diaspora.

Reflecting on the Scriptural readings of the day, the archpastor stated:

Submission to authority is not something that is understood in our culture.We all want to have authority, but few want to have to submit to it. The idea that we should do something just because someone says to is difficult for us. We just don’t like to be told what to do. After all, we live in a democratic society.If we do not like our governmental leaders, we simply vote them out of office. We also live in a free market. If we do not like our supervisor, and he does not treat us the way we want, then we either try to move him out or we move out. If our professor in college doesn’t treat us right, then we drop his course or transfer to another school. If we don't like something about the pastor of the church or the church services, then we move to another church. If our spouse doesn’t meet our expectations, we divorce him or her. If this is where we are as a society, then it is no wonder that we have trouble understanding authority.

But the key to having authority in our lives is our ability to submit to authority.Our Gospel lesson today, gives us an amazing insight to this very subject. It is the story of a man who understood both being under authority and exercising authority. And it is the only one of the few places in Scripture where Jesus is so amazed at what He sees that He comments on someone’s faith.

This Roman military man was a man who understood authority. When Jesus offered to come to his home and heal his servant he said that Jesus did not have to do that. The reason he gave was that he understood authority. He was a man who was in authority himself, who was under authority, and who had learned to use authority. This centurion saw in Jesus, the second person of the Holy Trinity, the authority of God, and he also saw himself in relation to that authority. He said that he was not even worthy to have Jesus in his house. You see, this centurion saw in Jesus ultimate authority because Jesus is the authority. He is God. And so he told Jesus to just say the word. He knew that for Jesus it was enough to give the command and the things would happen. All Jesus needed to do was just say the word.

The Lord was so impressed with this centurion’s understanding of authority that He said that He had not seen faith like this in all of Israel. Here was a man who had learned to be a follower and had himself gained authority by learning obedience. He came to Jesus because he saw the authority of God. He humbly submitted to that authority and all he wanted was for Jesus to just say the word.

I must admit that deep down within me I really want to be that kind of person. I want to be a just say the wordfollower of Jesus Christ. And I believe that any person who has made a commitment to Christ has that desire. There is something so appealing and so exciting about making a full commitment to something. We admire people who are fully dedicated and committed to some project, or person. When we say, "I’m going to give this my all," and when we do, we feel good about ourselves.

When we think about our relation to Christ, do we see ourselves as a just say the wordfollower? We want to be a totally committed follower of Christ. Deep down inside we want Jesus to make a difference in everything we do. We want our relationship with Him to impact our decision making, our money management, our vocabulary, our relationships, and everything else we do in living our lives. We want to be totally surrendered to His love and leadership. This is what it means to be a just say the wordfollower of Christ.

So what can we do about becoming a just say the wordfollower of Jesus? The first thing you need to do is to make a commitment, if you have not.

Then you must do some things that will place you under His authority. You may be thinking that making a commitment does that. But that is a misconception. Christianity is relationships. It is a relationship with God lived out in the context of a community of the saints, community of God's people. This means that we must enter into truly Christian relationships with others. We must build into our lives ways to be responsible for how we live our Christian lives. We must enter into relationships with others who can help us be responsible.

So, how about that?Do you want to become a just say the wordfollower of Jesus Christ? Is God speaking to your heart right now? If He is, then you have a decision to make.

The entire congregation of about 75 people in attendance partook in the Holy Communion from the hands of their archpastor, thus truly uniting with the Lord and each other in one chalice of His sacrificial love.

Following the veneration of the cross from the hands of the archpastor, the congregation partook in the Sunday brunch, prepared by the ladies of the parish congregation.