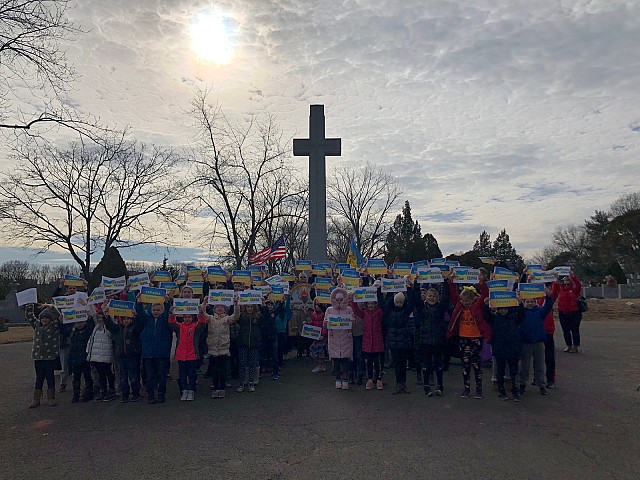 The Youth of the Church in the United States of America

Prayerfully Remembers the Heroes of Ukraine

Surrounded by the children of the Church, His Eminence Archbishop Daniel presided over the Memorial Service at St. Andrew Ukrainian Orthodox Cemetery in South Bound Brook, NJ reflecting upon the sacrifices of thousands of brave souls that have sacrifices their lives in the service of the ancestral homeland Ukraine.

Over a hundred students from St. Andrew School of Ukrainian Language and Religion (South Bound Brook, NJ), came to the very heart of the historic spiritual center of the UOC of the USA, marking a sad event of Ukrainian history  - the ultimate sacrifice of young students in the service of the Ancestral Homeland Ukraine.

On 22nd January 1918, the Ukrainian Central Rada proclaimed an independent Ukraine, under the name of the Ukrainian National Republic. This Act would give the indigenous population the freedom and equal rights they had been denied for centuries whilst under occupational and Soviet rule.

On 29th January 1918, only seven days after the declaration of independence, almost 400 Ukrainian university students chose to block the route of the Bolsheviks into the city of Kyiv, by positioning themselves at the railway station at Kruty. The young scholars, with no military training and limited weapons at their disposal, were physically no match for the Bolshevik army, and nearly all 400 men died in battle.

Reflecting upon the ultimate sacrifice of Kruty students, Vladyka Daniel made references to the historic struggle of Ukrainian people for their independence, yet linking his reflection to the ongoing historic battles and present wars that are being fought in the ancestral homeland Ukraine – ensuring that the God-given rights of freedom and political, economic and religious unity are preserved and passed to the next generation of Ukrainians throughout the world.

Standing at the main Memorial Cross of the Cemetery and chanting the solemn Memorial Service, Vladyka Daniel, clergy and children of the Church prayer for the heroes of Kruty, the fallen men and women of the ongoing conflicts in Ukraine as well as those who sacrificed their lives in the service of the United States of America.

Pointing to the icon of the Birth-Giver of God, Protectress of Ukrainian Soldiers, Archbishop Daniel explained to the students the meaning of Church’s prayer for the brave defenders of the homeland. Looking at the images of the fallen soldiers, which were presented for observations at the cemetery, Vladyka encouraged the children with their parents and teachers to never forget the tragic events of the past, while striving for the better and peaceful future of generations to come.

The commemorative program concluded with the chanting of a few national patriotic folk songs by the students of the school as well as by the seminarians of St. Sophia Ukrainian Orthodox Theological Seminary (South Bound Brook, NJ).

The Youth Prayerfully Remembers the Heroes of Ukraine

Latest News
St. Sophia Seminary Community Invites you for the Celebration of the Liturgy of Presanctified Gifts
Ukrainian Orthodox Church of the USA LIGHTS UP St. Andrew Ukrainian Orthodox Memorial Church in LIGHT BLUE Colors to Thank Health Care Workers...
Archbishop Daniel Participates in a National Conference Call with President of the United States of America and Faith Leaders Regarding the COVID-19 Response
Join Us For the LIVE STREAM of the Celebration of the Feast of the Entrance of Our Lord into Jerusalem - Palm Sunday!
The Spiritual Center of Metropolia Honors the Lost Lives of COVID-19
DIRECTIVE OF THE COUNCIL OF BISHOPS OF THE UOC OF THE USA CONCERNING PALM/WILLOW SUNDAY AND THE GREAT FEAST OF ALL FEASTS – THE RESURRECTION OF OUR LORD AND GOD AND SAVIOR JESUS CHRIST
POSTPONED: Annual St. Thomas Sunday Pilgrimage - ВІДКЛАДЕНО
Pastoral Reflections
Урочистий в'їзд Ісуса до Єрусалиму
Hosanna in the Highest—or Hypocracy in the Highest?
St. Mary of Egypt
Преподобна Марія Єгипетська
ХРЕСТОПОКЛОННА НЕДІЛЯ
Homily on the Sunday of St. John of the Ladder
The Second Sunday of Great Lent – St. Gregory Palamas
Upcoming
Archbishop Daniel's Liturgical Schedule
Calendar 2020 / Orthodox Daily Planner
Blessing of Paschal Food - Благословення Пасхальних Страв
Holy Week and Pascha Celebrations at the Metropolia Center of the Church
Month of APRIL in the Life of the Church - Місяць КВІТЕНЬ в житті Церкви
PASCHAL Letter of the Permanent Conference of Ukrainian Orthodox Bishops Beyond the Borders of Ukraine
Iconography Workshop
Recent Galleries