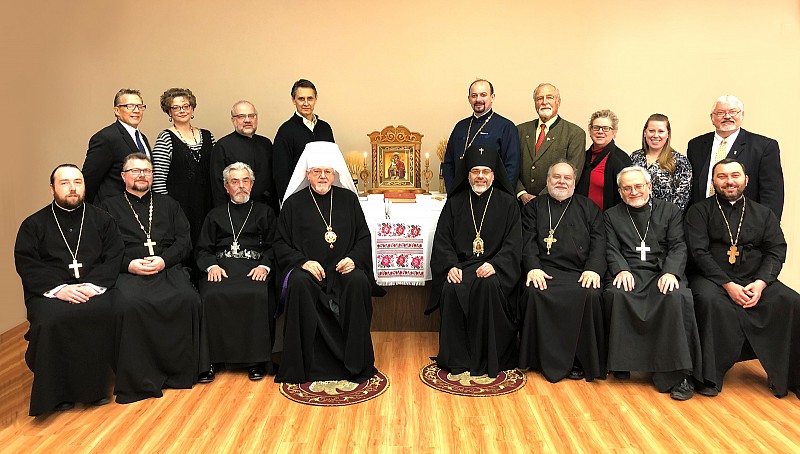 On a clear crisp day, as the geese huddled against the brisk cold wind, the Metropolia Center once again hummed with activity as the members of the Metropolitan Council gathered for their annual meeting. Once a year the members gather to meet and discuss various aspects of the life of the Church. With smiles for each other, everyone clasped hands, hugged and exchanged warm greetings upon seeing one another after so many months.

The meeting began as scheduled at 10 a.m. with a Moleben celebrated by His Eminence Metropolitan Antony and His Eminence Archbishop Daniel. Present also for the service were the Seminarians of the St. Sophia Ukrainian Orthodox Theological Seminary along with Fr. Vasyl Pasakas. Having prayed for God’s guidance and asked for discernment, the members of the Council settled down for the first of many sessions to be held.

His Eminence Metropolitan Antony called the meeting to order and taking the podium started the conference with a reflection on the Holy Spirit. Vladyka began by reminding everyone that during baptism, when the hymn “As many have been baptized into Christ, have put on Christ” is sung, and the newly baptized is carried/led in a circle by the priest, this symbolizes the newly illumined individual taking up their cross and following Christ. The individual is led around the center tetrapod three times (representing the Holy Trinity), in a circle (representing the eternity of God). Through theosis we attempt to become united with God, who became us, in order to enable us to share in His energy.

At our baptism we were given the gift of the Holy Spirit, however, too often we cast that priceless gift aside. We need to rely on His guidance in every situation. Today we live in a modern Babylon, surrounded by materialism, secularism and discrimination. The messages being touted today push beliefs that stand contrary to the teachings of Christ. This modern age, and its misguided views, has made people self-centered, and apathetic to the suffering of others around them.

We, as Orthodox Christians, must not bow to secular pressures, but, must seek in silence the voice of the Lord, and allow the Holy Spirit to guide us in our actions. He is there and waiting, since the moment of our baptism, but, we must allow Him to act in our lives, and not block Him out.

With everyone ponding the deeper meaning to the words of His Eminence, Vladyka Daniel took the podium. His Eminence Archbishop Daniel gave a detailed accounted of the Western Eparchy, and the 40+ parishes which are under his guidance. His Eminence was glad to report that the parishes in the Midwest and West are doing well. Currently there are two mission parishes, with a third in the works. All this points to the faithful wishing to connect with their God, their Church, and each other.

Following the report of on the Western Eparchy, His Eminence Metropolitan Antony gave a report on the standing of the Eastern Eparchy. His Eminence went through the list of 50+ parishes, one by one, and explained what is occurring in the life of each church. While some hardships do exist, the overall picture is bright. The parishes, large and small, serve the faithful in their areas providing spiritual nourishment, and Christian fellowhip.

Once again, His Eminence Archbishop Daniel took the microphone to present the Consistory President’s Report. His statement covered the Offices of Ministry, including Stewardship, Youth and Young Adult Ministry, Orphanage Mission Program, Religious Education, Christian Charity, Liturgical Publications, Clergy Development, Public Relations and Archives and Historical Information. Vladyka continued by giving an update on the St. Andrew Cemetery and Holy Resurrection Mausoleum, as well as the library and bookstore. The day’s session concluded with a review of the Financial Report, various funds and audits, concluding with the Seminary Report.

Friday, everyone arrived early to the Cultural Center, eager to hear all about the plans for this year. The meeting began with a report from John Holowko, President of the Ukrainian Orthodox League. The report was positive, stressing the importance of the UOL and JrUOL in the lives of our parishioners. The League brings everyone together, forms bonds, cements Christian values and is critical in keeping our children in our Church, not only through their youth, but as adults.

Protodeacon Dr. Ihor Mahlay was up next and gave a positive review of the St. Andrew Society, of which he is president. He explained how the society has aided countless people in Ukraine through charitable works and soup kitchens. The St. Andrew Society is a great way to make a positive difference in the world, and he urged everyone to join.

Other reports in the morning revolved around All Saints Camp, the Historical and Educational Complex, various additional aspects of Church life, and finally the Strategic Plan of the Church presented by Dr. Gayle Woloschak. The Strategic Plan has been in place for over a year now and while it had a slow start it is picking up and positive results are visible. Among the various aspects of the Strategic Plan are several goals which have been devised in order to improve various areas of Church life. Task Forces have been implemented to cover different facets such as administration, clergy, communications, education, family & youth, healthy parishes, outreach & evangelism, stewardship and technology. While all the goals are moving forward, the progress would proceed faster and would be more robust if more individuals participated and donated of their time and skills towards the effort. Once again, Metropolitan Antony urged everyone to participate, whether to a large extent or just with smaller tasks, because everyone has something to offer, and it is all for the good of the Church, and future generations.

After lunch, the members of the Metropolitan Council walked over to the temporary exhibit of the Ukrainian History and Education Center - “Shepherding Ukrainian Orthodoxy in a New Land: The Metropolitans of the Church” located in the temporary museum exhibit room of the St. Sophia Library. This exhibit documents the lives of the Church’s prime hierarchs, the historical and cultural contexts in which they lived and worked, and their legacies through photographs, museum items, archival documents, and audio recordings. As the members viewed the exhibit, they were awed by the vestments worn by the various Metropolitans, their heralds, and various articles and historical data presented about their lives.

Once again the council members returned to the business at hand and having reviewed and approved the 2018 budget, the focus of the meeting turned to the UOC of USA Centennial Celebration preparations. Several ideas and programs were discussed, as well as dates and venues. The main celebration will take place in South Bound Brook on Saturday, July 28. That same week the UOL will have their annual Convention at the Metropolia Center to coincide with the Centennial Celebration. It promises to be a memorable event. Save-the-Date postcards were mailed out months ago, and invitations will be sent out soon.

Metropolitan Antony offered the closing remarks, once again stressing the importance of everyone’s participation in the efforts of the Church. We are not to be complacent, but, active. Now is not the time to become lax. The Lord awaits and watches.

His Eminence Archbishop Daniel closed the session and gave the Benediction, ending the official proceedings, but the work is not completed, it is just beginning. Everyone went home realizing what is required of them, comprehending that the tasks are great, but, with the help of the Lord and guidance of the Holy Spirit, and the participation of many eager hands, the work will be done successfully.

The members of the Metropolitan Council once again exchanged handshakes and warm hugs, promising to keep in touch and work together to accomplish various assignments. With final waves and smiles, the area cleared as the geese flew in under the rising full moon, to find shelter for the night. Just as the geese fly in a flock for warmth, safety and conservation of energy, so the members of the Church should walk in step with each other, helping each other under the guidance of the Lord, “For where two or three gather together in My name, there am I with them.” Matthew 18:20

Council of Metropolia Meets at the Spiritual Center