On Saturday, September 9, 2017, the fullness of the Holy Ukrainian Orthodox Church of United States of America welcomed a new Priest into the midst of priestly ranks. By the Grace of God and through the laying on of hands of His Eminence Archbishop Daniel, the Ruling Hierarch of the Western Eparchy and President of Consistory of the UOC of the USA, Deacon James Cairns of St. Demetrius Ukrainian Orthodox Cathedral in Carteret, NJ and a graduate of Saint Sophia Ukrainian Orthodox Theological Seminary (South Bound Brook, NJ) was ordained to the Holy Priesthood.

Liturgical responses were sung by the members of the cathedral’s choir under the leadership of Nicholas Perkins along with the student body of St. Sophia Seminary.

After the reading of the Holy Gospel, Vladyka Daniel began to preach to the faithful the importance of giving Grace to people and expecting nothing in return. Vladyka focused on how the Grace of the Holy Spirit that was bestowed to him, is also bestowed, through the laying on of his hands, to Priest James. He said, “It is the greatest responsibility for him. As a bishop, he can do no more than be that vessel for the Holy Spirit.” 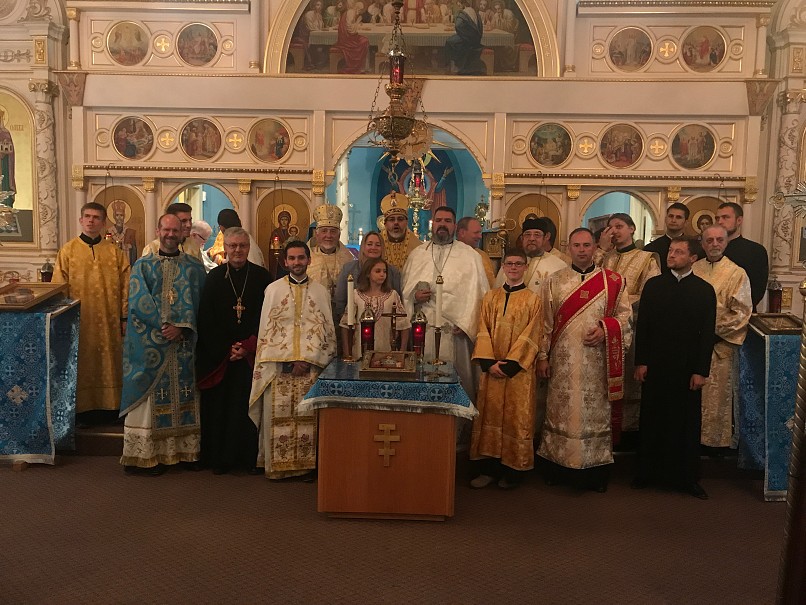 After the Great Entrance, time came for the ordination. Deacon James was brought forth by his fellow brothers in Christ, Protodeacon Ihor Rusyn and Deacon Ivan Tchopko. Bowing down before Christ three times, Deacon James humbly presented himself before Archbishop Daniel for the laying of the hands. Through the laying of the hands and the prayers of ordination, the same grace of the Holy Spirit came upon him as it did on the day of Pentecost in the presence of the Apostles.  In unison, the congregation too found Deacon James worthy, repeating after the clergy: Axios!

As Fr. James prepared himself for this day, his wife Pani-matka Denise stood faithfully beside him supporting him.

The liturgy concluded with greetings from His Eminence Archbishop Daniel and the newly ordained Father James addressed the faithful and clergy present.

After the liturgy, the clergy and guests were able to greet the newly ordained Fr. James and his wife during a luncheon prepared and served on the grounds of St. Demetrius social hall.