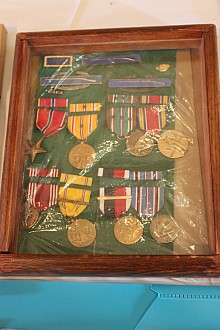 On 6 Nov 2016 in upstate New York, there was an early frost and it was still pitch dark at 5:45 AM, when Robert Onysko (his son Michael served 2 tours of duty in Iraq as a US Marine) placed several roasters full of holubtsi into the ovens. A short time later, David Mihalko (his father John served in the US Army during WW 2 North Africa, Italy, France, Germany) began seasoning the several huge pieces of roast beef for the ovens. What was going on at St. John’s in Johnson City, NY on Sunday 6 Nov 2016?

Our parishioners were in the final preparations for “Salute and Honor St. John’s Military Veterans”, a commemoration to all our veterans who served in the Armed Forces of the United States of America. This was for all St. John’s Military Veterans, those who have passed away plus those who are living, who had served during World War I, World War II, Korean War, Cold War Era, Vietnam War and recent and current Gulf Wars.

A few hours later in the early sunshine illuminating the colorful Fall foliage, at 8 AM our beloved Hierarchs, His Eminence Metropolitan Antony and His Eminence Archbishop (Elect) Daniel drove into the rectory driveway with four of our Seminarians. We were on schedule for our long planned event, “Salute and Honor St. John’s Military Veterans”. As Brian Baxendale, our Parish Council President, and I waved to our arriving Church Hierarchs, I said, “They’re here, so let’s make this happen!”

On 6 Nov 2016, St. John’s parishioners saluted and honored our 146 Veterans with a tribute for their sacrifice and service to our nation, the United States of America.

All were called, all served their nation, and through the Grace of God, all returned safely.

“We hope and pray that the sacrifice made by you will not have been in vain, but that your efforts in defending a noble and humanitarian cause will prove to the world that the American way of life - is God’s way.
May our St. John’s Memorial Center always be a living memorial to the American and Christian ideals you defended. This Center shall not be a Memorial to war, but instead a Memorial to the God-given rights and freedom which we have in the USA and which all of you defended so valiantly.”

This memorable event for St. Johns was successful primarily because of the 40-50 parishioners who together did the work to make this happen.