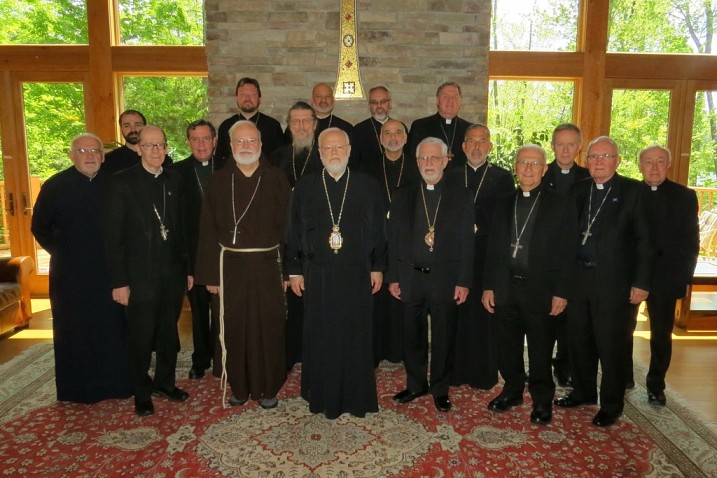 In response to our Lord’s prayer to His Father regarding His disciples “that they be one as you and I are one” (John 17:22), the Joint Committee of Orthodox and Catholic Bishops was established in 1981 by the Standing Conference of Canonical Orthodox Bishops in America, now the Assembly of Canonical Orthodox Bishops of the United States, and by the United States Conference of Catholic Bishops. This committee was the first formal gathering of Orthodox and Catholic bishops blessed and supported by both churches.

On May 22-24, 2016 gathered at St. Methodios Faith and Heritage Center in Catocook, New Hampshire 15 Orthodox and Catholic bishops gathered for the annual meeting, addressing and reviewing joint pastoral initiatives of both Orthodox and Catholic Churches in the United States of America and throughout the world.

The hierarchs of both churches worked through a comprehensive agenda, addressing various social and moral issues of our society. Moreover, the hierarchs discussed and addressed the most recent encyclicals of Pope Francis, Laudato si’ and his apostolic exhortation, Amrois laetita; as well as the statements delivered by His All-Holiness Ecumenical Patriarch Bartholomew and Pope Francis during their visit to the island of Lesbos. In addition, the bishops reviewed a presentation on the upcoming Great and Holy Council of the Orthodox Church.

During the second day of meetings, the hierarchs participated in the Divine Liturgy of St. John Chrysostom, which was served by His Eminence Metropolitan Methodios of the Greek Orthodox Metropolis of Boston, MA. His Grace Bishop Daniel of the Ukrainian Orthodox Church of the USA delivered a reflection following the liturgical service.

During the course of the meetings, the bishops discussed the present ecclesiastical situation n various regions throughout the world, especially reflecting on the Middle East and Ukraine. The committee concluded its work with the finalized statements on the Mission of the Joint Committee as well statements of a humanitarian crisis in the Middle East and expressed wishes and prayers for the Holy and Great Council of the Orthodox Church.