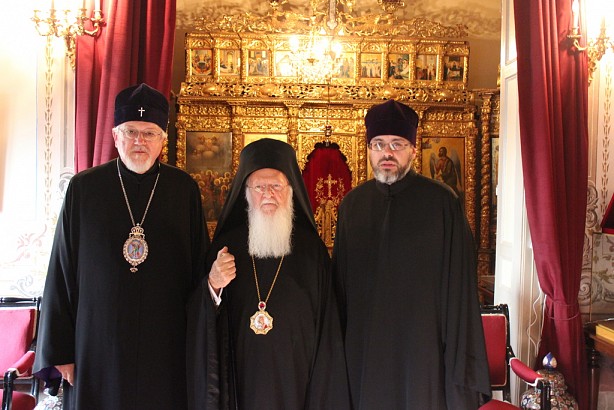 Following the conclusion of the plenary sessions of the annual meeting of the Permanent Conference of the Ukrainian Orthodox Bishops Beyond the Borders of Ukraine, the hierarchs of the Ukrainian Orthodox Church of the USA traveled to the ancient city of Constantinople in order to hold an audience with His All-Holiness Ecumenical Patriarch Bartholomew I on March 16-18, 2015.

Having arrived to Istanbul the bishops of the UOC of the USA, representing the brother hierarchs of the Permanent Conference met with the Members of the Holy Synod of the Ecumenical Patriarchate and in informal gathering reflected upon the current set of circumstances in the life of the Ukrainian Orthodox Church in North America and especially in Ukraine.

During the lengthy audience with His All-Holiness Ecumenical Patriarch Bartholomew I, His Eminence Metropolitan Antony along with Bishop Daniel shared with the Patriarch reflections on the most recent trip to Ukraine and meetings with the representatives of various jurisdictions of the Orthodox Church in Ukraine as well as with the President of Ukraine Petro Poroshenko.

The bishops expressed their concern over the continued ecclesiastical division in Ukraine, sharing with the Patriarch the observations of the hierarchs of various Orthodox jurisdictions in Ukraine about the logical and pastoral solution to the ongoing ecclesiastical disunity that exists in Ukraine. While yet another historic opportunity presents itself for political and economic renewal in Ukraine, the Church must claim and remain to be the moral conscience of the nation, - yet this noble and sacred concept is constantly under the attack by the circumstances of the ecclesiastical division.

His All-Holiness Ecumenical Patriarch, with parental love and concern received the reflections of the hierarchs of the Permanent Conference of the Ukrainian Orthodox Bishops Beyond the Borders of Ukraine and reassured the bishops of his constant prayer and attention that is dedicated to Ukrainian ecclesiastical division and the ways in which the anomaly may be resolved.

Leaving the Ecumenical Patriarchate for the United States of America, the bishops of the UOC of the USA made a one day visit to Ukraine in order to meet with the representatives of various ecclesiastical communities of the Holy Orthodox Church of Ukraine.