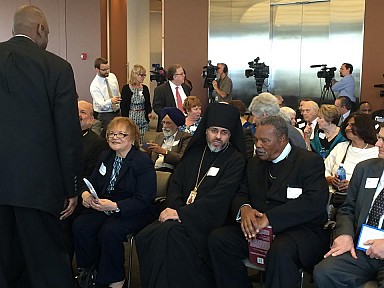 The Council of Religious Leaders of Metropolitan Chicago, at which Ukrainian Orthodox Church of the USA is represented by His Grace Bishop Daniel issued a formal statement addressing the atrocities perpetrated by ISIS in the recent beheading of two Japanese citizens and the burning alive of a Jordanian pilot.

THE COUNCIL OF RELIGIOUS LEADERS

Speaking on behalf of thirty-six religious communities in the Metropolitan Chicago area, we join the voices of our fellow religious and civic leaders around the world in condemning with the utmost force the heinous acts of violence perpetrated by ISIS in the recent beheading of two Japanese citizens and the burning alive of a Jordanian pilot. These unspeakable acts of barbarism and total disregard for human life-made blasphemous by being done falsely in the name of God-join with similar acts of violence and terrorism that have stricken the human family in recent days.

We note the unconditional condemnations of such depraved violence by many Jewish, Christian and Muslim leaders throughout the world, along with civic leaders and people of good will everywhere.

These horrible acts of terrorism committed in the name of God and religion impact our own Chicago community. These forces of evil have attempted to recruit our young men and women in their campaign of hate and violence. Their false invocation of religion as the justification for their actions puts a strain on our own religious communities and opposes everything for which authentic religion stands.

Spurred by these terrible tragedies, the Council of Religious Leaders of Metropolitan Chicago have determined to redouble our long-standing commitment to work together for the common good in a spirit of mutual respect and friendship. For over thirty years, we have met on a regular basis to sort through any differences among us, to share our common values of justice, peace, and respect for life, and to work together with our civic leaders to promote the welfare of our community. In the weeks ahead we intend to lift up and foster examples here in our own community where people of diverse religious traditions are working together in peace and mutual respect. We will continue to work closely with city, county and state officials to address issues of racism and economic inequity that also bring suffering and violence to our community.

Finally, we pray for God's mercy in the face of such terrible human evil and ask that God's peace will overcome the violence that plagues our world.