We live in a society whose basic premise is that reality is only that which can be seen, touched and quantifiably measured. Since we have exalted our human intellect to supremacy, even as people of Faith we are sometimes too quick to discount things which our own reasoning cannot fathom.

Today we celebrate what we commonly refer to as St. Michael’s Day, but the official title of the festal celebration, “TheSynaxis of the Archangel Michael and All the Bodiless Powers of Heaven”, reveals there is much more to contemplate. It is a day the Church invites us to ponder on the whole reality of a world we cannot see, yet is as real and important as you or I – the world of the angels. Angels – let’s face it, most of us consign them to children’s stories or cartoons, but hopefully some food for thought will help us have a more mature appreciation of their place in God’s Plan of Salvation.

What are the angels? The angels are created beings of pure spirit, possessing rational intelligence and free will. By God’s Grace, they are immortal. They are not little gods; as created beings we do not worship them. They cannot know future events. They do not age or change. They can, with God’s permission, take on a physical form if needed, as when Michael appeared to Joshua the son of Nun, when Gabriel appeared to Zacharias within the Holy of Holies, to the Most Holy Mother of God at the Annunciation, or when Raphael travelled with Tobit.

Why did God create the angels? The whole purpose of the angels’ existence is two-fold, first, to praise and worship God, and to serve as His messengers, and second to serve as our guardians and protectors. We join with the angels in praising and worshipping God every Divine Liturgy as we sing “Holy, Holy, holy, Lord God of Sabaoth”, the heavenly hymn of praise revealed to the Prophet Isaiah. The very word angel “angelos” in Greek means messenger, and throughout Scripture we see many instances of them fulfilling this role. For this reason, in icons they are often portrayed wearing the regalia of the pages of the Imperial Court in Constantinople.

Our Lord confirms the reality of personal guardian angels. Each of us is assigned a guardian angel through the prayers of the Holy Mystery of Baptism, through the Fourth Prayer of Exorcism: Assign to him/her a radiant Angel to deliver him/her from every plot directed against him/her by the Adversary, from encounter with evil, from the noon-day demon, and from evil dreams.We pray to our guardian angels for their intercession and for guidance and protection, yet they cannot override our bad choices and decisions. When our soul is parted from our body, our guardian angel will be there as our advocate, hopefully with the record of our good deeds in our defense.

A common misconception we encounter through artistic license is that angels (certainly, aside from Michael, Gabriel and Raphael) are female. The fact is, because angels are pure spirits, they transcend the limitation of gender, which is a symptom of our physical existence. They are neither male nor female. Another common misconception we often encounter when we try to comfort someone who is grieving the repose of a loved one is that “he (or she) is an angel now”. Fortunately, that is not the case. Our reposed loved ones do not transform into something totally different; they remain who they have always been, retaining their personalities and identities – in short they stay human. At the General Resurrection their souls will be reunited with their bodies. So the number of angels is not added to each day, as new souls arrive, nor does God need to create new angels to be guardians for the newly-Baptized.

How many angels are there? The angelic population far exceeds the human population. The vision of the Holy Prophet Daniel reveals “Thousands upon thousands were ministering to him, and myriads upon myriads stood before him.” In The Apocalypse, St John reveals “I looked again and heard the voices of many angels who surrounded the throne and the living creatures and the elders. They were countless in number”. The ancient Hebrews had difficulty expressing large numbers. For the word translated as countless, he literally says “100,000,000 plus 1,000,000”! This is similar to our modern imaginary number “a gazillion”. The Fathers of the Church interpreted the Parable of the Lost Sheep, where the shepherd leaves his flock of 99 sheep to go looking for the lost one, as a metaphor for God’s loving concern for all his created beings – both the angels and humans. In other words, we humans comprise only 1% of living beings, the angelic hosts comprise the remaining 99%!

When did God create the angels? Based on a careful reading of Scripture, we can answer that as pure spirits, God created them before He created anything physical, because physical existence, as something changeable, is inherently inferior – this is alluded to in the Book of Job: “When the stars were made, all my angels praised me with a loud voice”, thus implying the angels had already been created before the earliest stages of physical creation began.

Based on a work attributed to St. Dionysios the Areopagite, a disciple of the Holy Apostle Paul, the vast array of bodiless heavenly beings is organized in three groups or choirs of three: the first consists of the Seraphim, Cherubim and Thrones, the second consists of the Dominations Virtues and Powers, and the third consists of Principalities, Archangels and Angels. Yet we must fight the human urge to therefore assume that there are class distinctions among the bodiless powers, or that some are somehow better than others. There is no ambition for promotion or jealousy over assignment. This “Celestial Hierarchy”, as St. Dionysios’ book is titled, is simply a means to explain that all angels have specific functions and roles, and their existence is ordered and serene.

The identity of the Archangel Michael as commander or leader of the Heavenly Hosts has its origin in the earliest religious consciousness of the Hebrews. At the instant of creation, one angel, identified as Lucifer, now known as Satan, rejected his role – he rebelled against God, and led others to rebel. Michael was the first to step forward in obedience to his God-created role, and lead the remaining faithful angels in casting out the rebellious angels, who, through their own choice, became demons. God did not create them for that purpose. As a result, Michael has always been recognized as the chief angel, and the upholder of Divine Order, and is usually depicted in iconography wearing military armor. The Hebrews considered him their guardian.

When St Constantine the Great established the capital, with his dream of a new Christian civilization, at Constantinople, one of the first churches erected was dedicated to St. Michael. Since the goal of the new Empire was to establish Divine Order on earth, to build a society founded firmly on the Gospel, it was natural for St. Michael to be chosen as the patron of Constantinople. Centuries later, when our ancestors accepted the Faith during the reign of St. Volodymyr the Great, it was then absolutely logical for them to choose St. Michael as the patron of the city of Kyiv, since they saw themselves continuing this holy mission. To this day, the heraldic symbol – the “coat of arms” – of Kyiv is the icon of St. Michael. The second holiest shrine in Kyiv, after St. Sophia (actually, “Holy Wisdom”, again just like in Constantinople) is St. Michael’s Golden-domed Cathedral. It was built in 1108, torn down by the Soviets in the 1930’s, and rebuilt when Ukraine re-achieved independence – a powerful witness to the devotion among our people to St. Michael.

In addition to Michael, Gabriel and Raphael, who are named in Scripture, ancient Hebrew tradition, which we accept, also includes the names Uriel, Salaphiel, Jehudiel, Barachiel, and Jeremiel. If we look closely, we see each name ends with the syllable “el” – EL was an ancient Hebrew name for God. We see that none of these angels has an identity that is separate from God; indeed, their identity is based on their relationship to God.

What about us? Would we think to introduce ourselves to a stranger by first explaining ourselves in relationship to God? Are we comfortable with the idea that those who dwell closest to the throne of Almighty God realize that their highest calling is to praise and worship Him, and serve Him obediently? We will be blessed if we can learn from their example and strive, with God’s help, to live the same way.

Holy Angels and Archangels, pray to God for us! 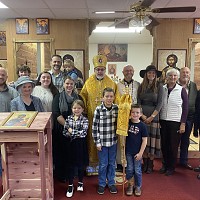 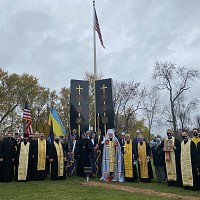