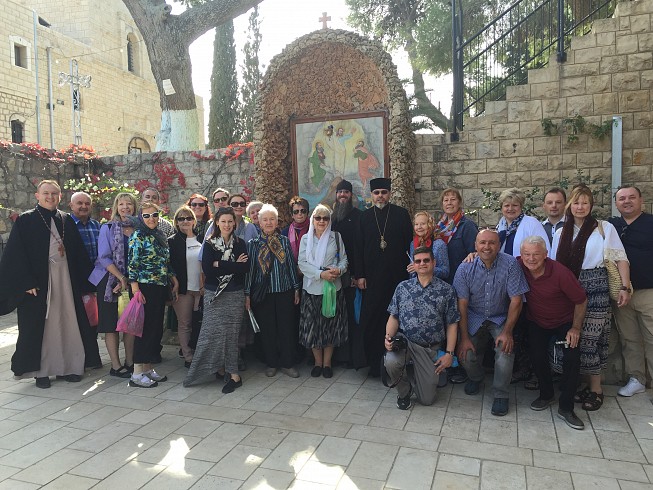 With the blessing of His Eminence Metropolitan Antony, 25 pilgrims of the Ukrainian Orthodox Church of the USA under the spiritual leadership of His Grace Bishop Daniel traveled to Nazareth (Israel) to begin a spiritual journey of the UOC of the USA to Holy Land.

Following a short meting at JFK International Airport in NY City, the pilgrims of the Ukrainian Orthodox Church of the USA began a 13-day journey to Holy Land and Constantinople, learning about the life of Christ and the salvations ministry of the Great Church of Christ.

Gathered from all around the country, the pilgrims of the Church embarked upon the journey trusting in the Divine Providence of God and the spiritual leadership of Bishop Daniel, who began the pilgrimage with the following note to the participants of 2014 UOC of the USA pilgrimage: “Let me begin, by welcoming you to this sacred journey during which we are all going to share the same title: pilgrim…

A pilgrimage to the Holy Land creates a rare vantage point for the one who makes the journey. It is a glimpse of a place where heaven came down to earth and left on that spot the indelible mark of divinity in the dust of the desert. God’s presence permeates the very soil on which the footsteps of the Master trod. A pilgrim who follows in those footsteps cannot help but be changed and have his life transformed by the experience.

A pilgrimage with sponsored by the Church affords a unique opportunity to deepen one’s spiritual life. It is truly a Christian pilgrimage from beginning to end. The holy sites of Jesus’ life are experienced from their connection to Sacred Scripture, the Mysteries of the Holy Church and the Holy Eucharist.

This pilgrimage is the journey of a lifetime that every present day disciple of Jesus should make to the earthly Jerusalem. When at last we reach the summit of the mountain on the journey of life, we will be able to look back with satisfaction and see that this pilgrimage to the Holy Land was one of the most spiritually fruitful experiences of our lives. It is then that we will be ready to exchange our experience of the earthly Jerusalem for the heavenly Jerusalem whose light is the Sun of Justice, the Lamb once slain who lives forever…”

The journey of faith that took the pilgrims to the birth place and ancestry of our Lord Jesus Christ began on November 10, 2014 with a twelve hour flight to Gurion Airport, Tel Aviv. A journey bedecked with enthusiasm and expectations.  As some of the pictures will depict, many of the areas visited still retain that ancient glamour and holiness which surrounds the stories about Jesus Christ which we read in the scriptures.

Upon arrival to Tel Aviv International Airport, the group immediately started its journey traveling to Nazareth and the surrounding areas of the Mount of Transfiguration – the Mount Tabor. One of the pilgrims of this year’s pilgrimage shared her thoughts: "These were two great first days. The pilgrims all arrived in good shape at the Ben Gurion Airport in Tel Aviv. We jumped on our comfortable bus and headed to Galilee. What a great group of authentic Ukrainian Orthodox Christians ready to experience the life of Christ and the Holy Mysteries of the Church as we travel the land of Christ the Savior and the Birth-Giver of God, the Apostles and prophets, kings and martyrs.”

The first two days brought the pilgrims of the Church to a prayerful reflection, as they visited the Mount Tabor (Greek Orthodox Monastery of Transfiguration), Church of Annunciation and the Grotto of the Birth-Giver of God, Church of Cana of Galilee, Mt. Precipice and the entire Yizrael Valley.

During the next few days the pilgrims of the Church visited the following sacred sites of Mount Tabor, Capernaum, the Sea of Galilee, took a boat ride learning about the call of the disciples and visiting the sacred churches of the Twelve Apostles, etc. Among other sites were:

Long revered as the site of Jesus' first miracle or turning water into wine at a wedding, Kafr Kanna has good historical support for its authenticity as ancient Cana.

This, the first of his miraculous signs, Christ performed in Cana of Galilee. He thus revealed his glory, and his disciples put their faith in him. (John 2:1-11)

On the third day a wedding took place at Cana in Galilee.  Jesus' mother was there, and Jesus and his disciples had also been invited to the wedding.  When the wine was gone, Jesus' mother said to him, "They have no more wine." "Dear woman, why do you involve me?" Jesus replied, "My time has not yet come." His mother said to the servants, "Do whatever he tells you."

Nearby stood six stone water jars, the kind used by the Jews for ceremonial washing, each holding from 20 to 30 gallons. Jesus said to the servants, "Fill the jars with water"; so they filled them to the brim. Then he told them, "Now draw some out and take it to the master of the banquet."   They did so, and the master of the banquet tasted the water that had been turned into wine. He did not realize where it had come from, though the servants who had drawn the water knew. Then he called the bridegroom aside and said, "Everyone brings out the choice wine first and then the cheaper wine after the guests have had too much to drink; but you have saved the best till now."

Sea of Galilee: During his ministry Jesus also performed some miracles here, including walking on water, calming the storm and making the miraculous catch of fish. "Jesus crossed to the far shore of the Sea of Galilee (that is, the Sea of Tiberias), and a great crowd of people followed him." (Jn 6:1-2) "When they had rowed three or three and a half miles, they saw Jesus approaching the boat, walking on the water." (Jn 6:19)

Mount of Beatitudes: This name is given to the place where Jesus delivered the "Sermon on the Mount", beginning with the Beatitudes. The scene of this discourse is traditionally located on Karn Hattin (or Kurun Hattîn), the Horns of Hattin, a mountain which receives its name from the little village at its northern base and from the two cones or horns which crown its summit. Karn Hattin is in Galilee in easy distance of Nazareth, Cana, and Mt. Tabor to the southwest, of Tiberias and Lake Gennesaret to the east, and of Capharnaum to the northeast, in the center, therefore, of much of the ministry of Jesus.

The first stop of Day 4 was a visit to Jordan River – and the place of Baptism of our Lord by St. John the Baptist. His Grace Bishop Daniel along with Very Rev. Volodymyr Stelaik and a few pilgrims entered the waters of Jerusalem in order to experience the grace of Christ’s Baptism in the River Jordan.

Please visit this page again to find out about the journey of the Church’s Pilgrims to Holy Land in the next few days.