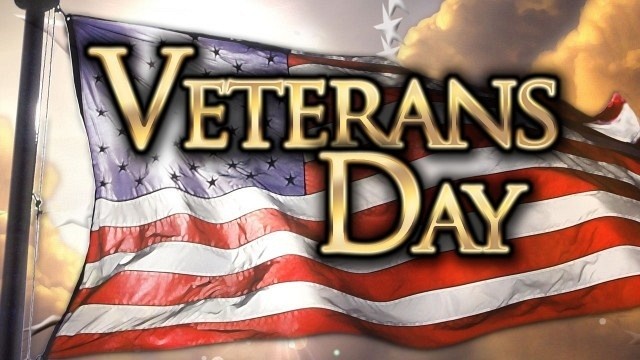 Tuesday, November 11, 2014 is Veterans Day. On this day we remember all those who have served our great nation – the men and women who put themselves in harm’s way to defend our way of life and the values we hold dear, along with the freedom which guarantees that life and those values. We owe a tremendous debt of gratitude to those killed in the line of duty, those suffering from the effects of their time of service during war and otherwise and, of course, all those who have retired from active duty.  The extent of such gratitude cannot be measured. The sacrifices made by our veterans and their families are freedom’s foundation. Without the efforts of all the soldiers, airmen, sailors, marines, coast guardsmen, and their families, we would have little comprehension of what that freedom means.

The observance of Veterans Day, November 11, began almost a century ago. In the 11th hour of the 11th day of the 11th month of 1918, the Allied Nations and Germany declared an armistice—a temporary cessation of hostilities—in World War I. Commemorated as Armistice Day the next year, November 11 became a legal federal holiday in the United States in 1938. After World War II and the Korean War, Armistice Day became Veterans Day, a holiday dedicated to U.S. veterans of all wars.

As we mark this year's Veterans Day and prepare for the observance of Thanksgiving Day, is the perfect time for our parish communities to engage in ministry with active troops and the families left behind. Here are some ideas:

Reach out to soldiers

• Honor deploying troops, praying for safety and for peace. Include deployed soldiers on the weekly prayer list. Municipal offices of our cities and towns maintain the list of deployed soldiers and veterans of the community.

• Invite children to write thank-you notes and draw pictures for troops, especially at special times such as Veterans Day. This is a good class project.

• Do something special for troops during the holidays. As an example: Send a Cup of Joe for a Joe. Since 2009, the Green Beans Coffee Company has delivered a cup of coffee and a personal note to troops serving far from home (www.greenbeanscoffee.com/coj/). The company has cafés on military bases in Afghanistan, Djibouti, Iraq, Kuwait, Kyrgyzstan, Qatar, Southwest Asia and United Arab Emirates.

• Go to the United States Department of Veterans Affairs (www.va.gov/opa/vetsday/) website for planning ideas and images.

Reach out to families of veterans and active duty soldiers

• Identify the military families in your community.

• Are there any wounded veterans? Offer their families assistance with yard work, errands, childcare, respite care and transportation to appointments.

• Start a “veterans only” fellowship. Reservists and veterans, especially in areas remote from military bases, often find it difficult to find others with whom to speak about their military experiences. Those who have experienced combat are especially in need of fellowship with other combat vets. Begin with the veterans of any war who are in your community.

• Holidays can be especially difficult for military families who move often and usually live far from extended family. Invite them to share an activity or meal with your family. Give them good community info like where to get the freshest real Nativity/Christmas tree or the best deal on decorations; what parades, concerts and festivals are held annually; and especially inform about religious services and memorials being offered in the community. Ask what additional support they need through the holidays while their loved one is deployed.

• Invite military family members to participate in community-outreach projects with other members of the parish family.

Always pray for military members and their extended families.

On this Veterans Day 2014, the Council of Bishops, clergy and laity of the Ukrainian Orthodox Church of the USA, express profound gratitude to Ukrainian-American veterans and all those veterans whose service in the armed forces preserved the foundation of freedom, justice and equality, upon which this country was built and remains anchored.

Finally, on this Veterans Day weekend and beyond, let us actually say: “Thank you for your service!” to all the veterans we know and do the same with any uniformed active-duty members of the Armed Forces, wherever we may meet them – like in an airport. Today’s active-duty personnel will be the veterans of the future and our kind gestures may be the one memory that warms their hearts during difficult times.

Latest News
00000
Church Offers Help to Ukrainian Elderly and Children During the Time of War
00001
Join us for the Opening of the New Academic Year 2022-2023
00002
Let's Prayerfully Celebrate the 31st Anniversary of Ukraine's Independence - August 28, 2022
00003
XXIII Regular SOBOR of the UOC of the USA - Registration Available NOW
00004
Mommy & Me/ Daddy & Me Encampment Receives a Surprise Visit of Archbishop Daniel
00005
We Serve the People of Ukraine via Our Daily Prayers and Deeds of Love
00006
Youth Ministry Certification Offered Through St. Sophia Seminary!
Pastoral Reflections
00000
Ходження по воді
00001
If You Want to Walk on the Water Then Get Out of the Boat
00002
Св. Князь Володимир і Хрещення Русі-України
00003
Blessed Equal-to-the-Apostles Olha, princess of Kyiv
00004
Про важливість тіла людини
00005
Two Demon-Possessed Men Healed
00006
Vacation from God?
Upcoming
00000
Archbishop Daniel's Liturgical Schedule
00001
Month of AUGUST in the Life of the Church - Місяць СЕРПЕНЬ в житті Церкви
00002
UOC of the USA: Our Humanitarian Mission in Ukraine
Recent Galleries