1 And when they drew nigh unto Jerusalem, and were come to Bethphage, unto the mount of Olives, then sent Jesus two disciples, 2 Saying unto them, Go into the village over against you, and straightway ye shall find an ass tied, and a colt with her: loose them, and bring them unto me. 3 And if any man say ought unto you, ye shall say, The Lord hath need of them; and straightway he will send them. 4 All this was done, that it might be fulfilled which was spoken by the prophet, saying, 5 Tell ye the daughter of Sion, Behold, thy King cometh unto thee, meek, and sitting upon an ass, and a colt the foal of an ass. 6 And the disciples went, and did as Jesus commanded them, 7 And brought the ass, and the colt, and put on them their clothes, and they set him thereon. 8 And a very great multitude spread their garments in the way; others cut down branches from the trees, and strawed them in the way. 9 And the multitudes that went before, and that followed, cried, saying, Hosanna to the son of David: Blessed is he that cometh in the name of the Lord; Hosanna in the highest. 10 And when he was come into Jerusalem, all the city was moved, saying, Who is this? 11 And the multitude said, This is Jesus the prophet of Nazareth of Galilee. 15 And when the chief priests and scribes saw the wonderful things that he did, and the children crying in the temple, and saying, Hosanna to the son of David; they were sore displeased, 16 And said unto him, Hearest thou what these say? And Jesus saith unto them, Yea; have ye never read, Out of the mouth of babes and sucklings thou hast perfected praise? 17 And he left them, and went out of the city into Bethany; and he lodged there.

Two millennia ago, the residents of Jerusalem welcomed Christ as the savior of the Jewish people—a worldly ruler who would free them from the yoke of the Roman empire. Their Messiah would be a king in the conventional sense—with royal purple robes, a crown encrusted with precious stones, a scepter to show his earthly position, and a sword to lead his armies into battle and victory over all who would oppress his people.

Instead, Christ entered Jerusalem as a symbol of a different kingship—that of the Kingdom of Heaven—a kingdom of peace and love, of meekness and kindness, of a hand reaching out to help rather than holding a physical weapon. His rule would certainly not be what the people expected…nor what they wanted. Temporal power and strength were the visible signs that the Jews looked for in their Messiah…not a humble and quiet man who taught them peace, love, and REPENTANCE!

Throughout the ages, human beings have sought a better life…many times not realizing that what looks better to them is truly worse FOR them! The old adage that “the grass is always greener on the other side of the fence” is true regardless of the date on the calendar. We yearn for something more grand, shinier, prettier, bigger, better, faster, and at times anything other than what we have now. We forget that many times we have struggled to get there—sacrificed time, effort, and money—only to look at our neighbor to see the “new and improved model” of whatever we have!

Those who welcomed Christ did not have an easy life—there was no internet, HDTV, smartphone, iPad, iPod, iPhone, or other gadgets that make our lives easy today. They struggled to feed their families and to have a roof over their heads. The Roman authorities knew one way to rule—FEAR! They constantly had to show everyone that they could—and would—crush anyone or anything which they saw as a threat to their power. Any hint at a popular leader rising from among the Jews was met swiftly and decisively with action…banishment, prison, and death were the typical solutions.

Crucifixion was the “prime-time” solution—threats, or perceived threats—were quickly tried and the execution was slow, painful, and very visible to all—the victims were tortured and hung along the roads of Jerusalem so all might see the power of Caesar! Intimidation and fear were the constant companion to those who lived in the days of Christ…whether from the Roman soldiers or the Jewish authorities who were in league with them. The bodies of those crucified were left to rot in the hot sun, then taken down to be eaten by the wild animals—a visible reminder to anyone who would dare think of challenging the status quo.

When Christ appeared, hope came to the Jews—here was a man who would take away their daily sufferings—free them from the yoke of the Roman eagle and the high priests… They looked for a better life in this world and saw Jesus as the one who would lead them to that life. They never realized that the kingdom that Christ brought was not of this world, but that of His Father in Heaven!

Christ was also a very real threat to the priests and elders who were beholden to the Roman authorities for their power…and their standard of living. As long as they kept order among their people, the Romans would allow them a large amount of freedom. If, however, the populace began to grumble and showed signs of discontent, the Roman governor would immediately send his troops to stop it—whether indirectly, by removing the Jewish leadership, or directly by going into the city and removing the leaders of the insurgents.

This was the reality of the time when Christ came to Jerusalem to confront the temporal rulers…Caiaphas and Pontius Pilate would both be challenged by Jesus. He would be tried and led out to the people along with Barabas—one of them would be released by Pilate. Those same people who had welcomed Him with palms and branches of trees—who had taken off their cloaks and laid them upon the road as He entered Jerusalem—would cry out “Crucify him! Crucify him!” when prompted by the leaders of the Jews.

How easily the people were transformed—from love and happiness to hate and anger…because they did not get what they wanted—immediately! We must be careful that we do not imitate them—we must trust that our welcoming Christ into our lives is sincere and honest—that we know He will be with us and will lead us to His Heavenly Father and the Kingdom that He has prepared for us. Palm Sunday can be a wonderful opportunity to welcome Christ into our hearts—and our lives—or it can be the hollow going-through-the-motions event that it was so many years ago.

We are the only ones who control how we act—will we be those who truly welcome Jesus of Nazareth as our king and leader, or will we expect Him to be our personal servant—giving us what we want and when we want it?

Think carefully—the answer you give determines how you live your life and how you will have to answer before the Dread Judgment Seat!

May our Lord and Savior fill your heart and your whole life with is Light! God Bless your journey to Pascha. 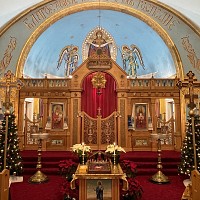