Christ is Risen! Indeed He is Risen!

Though it hasn't been heard in common parlance lately, many years ago, the term 'Doubting Thomas' was used to describe someone who was of a contrarian, doubting nature. 'I doubt it' was their catchphrase to any claim or statement that, at least to their ears, sounded incredulous. Those 'Doubting Thomases' owe this moniker, or nickname, to the Holy Apostle Thomas, to whom the Sunday following Pascha is dedicated. On this particular Sunday, the Holy Gospel Lesson is from St. John, chapter 20, verses 19 - 29. There-in we read of Jesus' second appearance to his Apostles after His resurrection.

Jesus appeared to the disciples once, about a week earlier, on the evening of Resurrection Sunday. The Apostles, less Thomas, were gathered together in some house, behind closed doors, hiding, for fear of the Jews we are told, lest the same fate meet them as befell their beloved Master. Lo and behold, that same Master, who just two days before, on Friday, was crucified, died on the cross, was taken down and placed in a nearby tomb whose entrance was sealed with a heavy stone, now on Sunday evening stands before them. The shock and awe they must have felt is difficult to imagine. Fear gripped them as they see Jesus in their midst, the doors to the house still shut. Jesus dispels their fear, greeting them: "Peace be with you". He showed them the wounds on His hands and the spear wound in his side to prove to them that it was not an apparition they beheld, but truly, their recently crucified, and now resurrected, Master. Satisfied that it is indeed the Lord, the disciples’ fear now turns to joy.

About a week after the first appearance to His disciples after His resurrection, Jesus appears to them again, like before, without opening shut doors, but this time with Thomas present. While the others might not have been as frightened, Thomas, no doubt, was astounded! Bidding peace to them all, Jesus turns to Thomas and says to him: “Reach your finger here, and look at My hands; and reach your hand here, and put it into My side. Do not be unbelieving, but believing.”

What could Thomas have said, what could any one of have said to this invitation to proof and to truth, other than the reply given: “My Lord and my God!”

Thomas was not disbelieving of Our Lord by nature. Remember, that he was quite enthusiastic, and encouraged his fellow disciples about two weeks earlier to follow Jesus to Bethany, in spite of the threat of death, saying to them “Let us also go, that we may die with Him.” Thomas might have willingly died with the Master. Yet, knowing that Jesus had died, and not yet fully understanding that these things were meant to happen, the grief was too much for Thomas, and the others, to bear. Thomas saw the miracles his Master, in loving kindness, performed and he heard what Jesus spoke to the disciples. Yet now, grief stricken and in fear of his own life, Thomas neither perceives, nor comprehends the events that led up to Jesus’ appearance to the disciples. Uttering words of simultaneous admonishment and encouragement, Jesus says to him: “Thomas, because you have seen Me, you have believed. Blessed are those who have not seen and yet have believed.”

Certainly, those who come to this web site, and take the time, and interest, to read these reflections are of those 'who have not seen and yet have believed'. Praise be to God, Who, “…revealed the fishermen as most wise sending down upon them the Holy Spirit. Through them, You have caught the whole world in your net.” Through their faith, courage, and witness, our fore-bearers were evangelized, and so we, through them. The Holy Apostle Thomas was one of those fishermen most wise, who, enthusiastically once again, and without doubt, ventured eastward spreading the Gospel of the Kingdom of Heaven. What a shame, that in these times, the world so often turns from blessedness, and instead chooses neither to seek, nor to see, nor to believe. 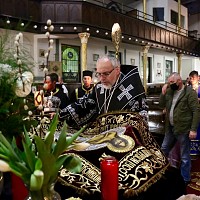 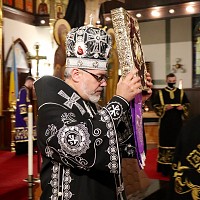