A Tree Is Known By Its Fruit!

While the children at St. Mary the Protectress Ukrainian Orthodox Cathedral in Southfield, Michigan, are little more than saplings, they are already beginning to bare good fruit. During the week of June 20 – 24, 2011, sixteen children participated in the 4th Annual Summer Vacation Church Camp, the theme of which was “The Fruits of the Spirit”.

The week long school was run by Elizabeth Symonenko, who is also the religion teacher at the Lesia Ukrainka School of Religion and Ukrainian Studies, affiliated with the church.

The week began with Father Paul Bodnarchuk serving a short Moleben in the church with the children, asking that God keep them all safe during the week, that He open their hearts and minds so that they would learn what was being taught, and mostly that through this “camp” they grow closer to God. After the service the children began their week filled with education and fun!

To assist the children in memorizing the various Fruits of the Spirit which are listed in Galatians 5:22-23 “ But the fruit of the Spirit is love, joy, peace, longsuffering, kindness, goodness, faithfulness, gentleness, self-control,” each spiritual fruit got assigned an actual fruit. Love was a strawberry, because a strawberry looks like a red heart; Peace was a watermelon, because you eat a “piece” of watermelon; Patience was a lemon, because you have to eat it slowly and patiently; etc. Each day revolved around a particular Fruit of the Spirit and the children learned in detail what they meant, how to nurture these fruits, and what happens when that fruit rots and falls to the grown.

The lessons where not strictly memorization, but, where mental exercises, as well. Many of the assignments mandated that the children slow down and think. One project required the usually boisterous kids, who are always teasing each other and pointing out what they don’t like in others, to stop and reverse this process, and reveal what they like about each other. To some, this was a new concept, instead of looking for something to laugh at or ridicule, they had to write about something they admire or appreciate in the other children.

Summer camp is not all about studying, it also entails fun and games! The children played a myriad of games, each one designed to bring out a particular “Fruit of the Spirit” and nurture the idea of teamwork and family – many branches of the same tree. One of the most entertaining games was the blind maze. As the midday sun shown happily in the sky, a series of inverted plastic cups gleamed as they were laid out in a pattern on the sidewalk. One child was blindfolded and had to depend on the other children to “talk” them through the maze without hitting any of the cups.

Fruits are made to be eaten. Therefore, the kids spent hours gleefully cooking up all kinds of delicious fruity treats! In addition to the apple dumplings and ice-cream sundae strawberry cakes, they made fresh fruit smoothies, and applesauce. That’s right, applesauce from scratch! Anna Powers demonstrated how to make delicious homemade applesauce, and supervised as the kids each peeled, cored, cooked and spun the apples through the food mill! You’ve never seen kids eating apple sauce with such gusto!

The seeds that they saved from their apples, were placed in plastic baggies with a moist towel, and taped to the window mimicking a tiny green house in the summer sunshine. By the end of the week, each child went home with their own tiny apple sprout.

They’ve studied, they’ve cooked, they’ve played games and watched movies, now it’s time for crafts! No summer camp is complete without crafts! This year the children painted, tied, glued and decorated a wide variety of items, ranging from bracelets, plaques all the way to birdhouses.

The highlight of the week was the arrival of the Ice Cream Truck on Friday afternoon. The children waited all week for the truck to show up. Even the rain couldn’t dampen their happiness, as they dodged the raindrops to get their ice-cream! After all, fruit trees need a little rain in order to grow!

Having satiated their hunger, the kids got down to work as they headed back in to the church on Friday afternoon with dust rags, brooms and paper towels in tow. They swept the floors, removed the wax from the candle stands, cleaned the cobwebs from the windows, washed the windows and polished the wood. Everyone worked joyfully together to clean the church. While this resulted in a clean church, it also nurtured a sense of pride and ownership in the children. The following Sunday when they came for Divine Liturgy, they felt more “at home” and were smiling because they had contributed to the beauty of God’s House.

Ready, set, action! Every year on the final day of camp the children put on a stage performance for their parents, demonstrating the nuances of what they learned during the week. While the parents nibbled on fruit salad, desserts and smoothies prepared by the kids, the children showed off their acting skills on stage. While the narrator, Milya Smyk, read about each specific fruit, the rest of the children acted out a scene representing the essence of that fruit. To represent “Patience” the children “drove” across the stage and got stuck in traffic. Instead of getting angry or honking their horns, they happily waved to each other, turned on the radio and sang songs. After the main program concluded, the children executed skits they wrote themselves, each demonstrating a particular aspect of kindness or gentleness.

The person who exhibits the most Fruits of the Spirit most definitely wins in the end. Having become familiar with the Fruits of the Spirit, the children were instructed to actually display these virtues in real life. For each good deed, for each fruit that was exhibited, the children were rewarded with a wooden fruit (large colored wooden beads). Each little stash of fruit grew daily. By the end of the week nobody had less than 20 pieces of fruit. While each child received a parting gift at the end of the week, the child with the most collected fruits got to pick first from the barrel.

While the church camp has come to an end, the Fruits the children have learned about, have gone out in to the world and are multiplying. Not only do the kids still recount the fruits and repeat them, they all have memorized the Prayer to the Holy Spirit, and recite it daily. Good things don’t come to an end, they simply change. The little saplings are reaching their branches up higher and higher, reaching towards the Son, and producing bushels of good Fruits of the Spirit. 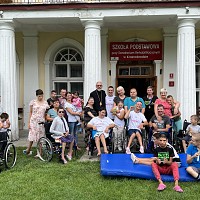