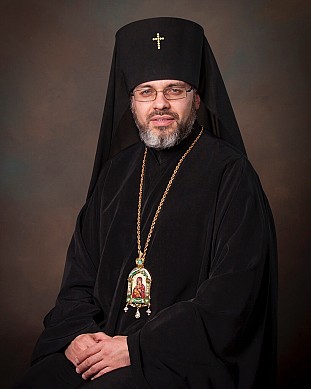 A native of Ukraine, Archbishop Daniel (secular name: Volodymyr Zelinsky) was born in the small town of Buchach, Ternopil Region (similar to a state), Ukraine. He grew up in this region where he graduated from a local high school and enrolled in his first course of theological studies in the Seminary of Ivano-Frankivsk in September, 1993. Following his education in Ukraine, Volodymyr emigrated to the USA in 1996 to continue his education at the Catholic University of America as well as the Dominican House of Studies in Washington, DC. During this time, he was ordained to the Holy Deaconate.

In 2000 Deacon Volodymyr was received into the UOC of the USA and enrolled in St. Sophia Ukrainian Orthodox Theological Seminary in South Bound Brook, NJ. With many years of theological study already completed, his advanced standing enabled Fr. Daniel to complete the Orthodox theology program in two years. He concurrently enrolled in a graduate studies program in Applied Orthodox Theology at the University of Balamand, Holy Patriarchate of Antioch (Antiochian House of Studies, USA), receiving his Master's Degree in 2002.

Deacon Volodymyr was ordained to the Holy Priesthood by Archbishop Antony on May 12, 2001 in St. Andrew Ukrainian Orthodox Memorial Church, South Bound Brook, NJ. On May 22, 2002 the Archbishop tonsured him as a priest-monk (Hieromonk), with the name Daniel, at St. Elijah Ukrainian Orthodox Monastery in Dover, FL. Following his monastic tonsure, Fr. Daniel was appointed assistant editor of the Ukrainian Orthodox Word (UOW), the official publication of the Ukrainian Orthodox Church of the USA. In September 2002, he became Editor-in-Chief of the UOW and remains in that position today. Also in 2002, His Eminence Archbishop Antony appointed Fr. Daniel director of the Consistory Office of Public Relations (Communications) of the Consistory, which publishes the annual Church Calendar and manages the UOC of the USA web site.

In 2003 Fr. Daniel enrolled in the Pittsburgh Theological Seminary (Eastern Orthodox Focus), completing all the requirements for the Doctor of Ministry Degree, which was conferred upon him during the seminary commencement ceremonies in May of 2007. In 2005, Fr. Daniel was appointed Spiritual Advisor to the United Ukrainian Orthodox Sisterhoods and Spiritual Advisor to the Church Orphanage Adoption Program in Ukraine. Archimandrite Daniel has led the college mission teams to the Orphanages for the past four years.

In addition, in January of 2006 Fr. Daniel was commissioned as an officer of the US Army (Chaplain Corps). He enrolled into US Army Chaplain School at Fort Jackson, SC from which he graduated in April of that year and served as a chaplain in one of the Medical Brigades of the United States Army. With the reactivation of a full academic program at St. Sophia Seminary, Metropolitan Constantine and the Seminary Board of Trustees appointed Fr. Daniel Dean of Students in 2006.

At the 2007 Convention of the Ukrainian Orthodox League of the USA, Metropolitan Constantine appointed Hieromonk Daniel Spiritual Advisor of the Senior League. In that capacity and at the request of the UOL Senior Board, he also accepted the position of Chairman of the Vocations and Clergy Support Commission, which administers the Metropolitan John (Theodorovich) Scholarship Fund. This fund provides financial assistance for seminarians and clergy to pursue continuing education.

On January 9, 2008, His All-Holiness and the Great and Holy Synod of Constantinople formally elected and ritually included Archimandrite Daniel in the Diptychs of Holy Orthodoxy as titular Bishop of Pamphilon. The Episcopal consecration of His Grace Bishop Daniel took place at St. Volodymyr Ukrainian Orthodox cathedral in Parma, OH – USA on May 10, 2008. Bishop Daniel has become known throughout the UOC of the USA and beyond as one to whom others can turn for advice, compassion and honest reflection. He is frequently invited to present lectures and reflections to various parishes and organizations – both Ukrainian and non-Ukrainian as well as Orthodox and non-Orthodox.

Following the repose of Metropolitan Constantine of blessed memory (21 May, 2012), the Bishop assumed the responsibilities of the Vice-Chair of the Council of Bishops of the UOC of the USA.

On Saturday, January 26, 2013 – following the Enthronement of His Eminence Metropolitan Antony, His Grace Bishop Daniel formally assumed responsibilities of President of the Consistory of the Ukrainian Orthodox Church of the USA at the spiritual headquarters of the UOC of the USA in South Bound Brook, NJ.

During the XXI Regular Sobor of the Ukrainian Orthodox Church of the USA (October 2016), Bishop Daniel was nominated by the delegates of the Sobor to the rank of Archbishop and upon the decision of the Holy Synod of Ecumenical Patriarchate was formally included in the Diptychs of Holy Orthodoxy as titular Archbishop of Pamphilon.

On November 3, 2018 Archbishop Daniel participated in the formal conclusion of the process and signing of the Agreement "On Cooperation and Interaction between Ukraine and the Ecumenical Patriarchate of Constantinople" by His All-Holiness Ecumenical Patriarch Bartholomew and President of Ukraine Petro Poroshenko.

On December 15, 2018 His Eminence Archbishop Daniel, along with Metropolitan Emmanuel of France (presiding hierarchs) and Bishop Ilation of UOC of Canada, participated in the Unification Council of the Orthodox Church of Ukraine.

On January 5-6, 2019 Archbishop Daniel participated in the official ceremony (at Holy Great-Martyr George Patriarchal Cathedral in Constantinople, Turkey) of signing and granting Tomos of Autocephaly to the Orthodox Church of Ukraine.